As the world prepares to join Pope Francis in consecrating Russia and Ukraine to the Immaculate Heart of Mary, the Vicar General of the Archdiocese of Moscow says the Act of Consecration is an expression of Catholics’ trust in Mary as our mother in faith.

Pope Francis will pray the Act of Consecration of Russia and Ukraine to the Immaculate Heart of Mary on Friday evening at 5 PM Rome time.

The Act will come near the end of the “24 Hours for the Lord” Lenten penitential service in St. Peter’s Basilica, and will be recited by Bishops across the globe in communion with the Pope.

Fr. Kirill Gorbunov, Vicar General of the Archdiocese of the Mother of God of Moscow, spoke to Vatican News’ Giancarlo La Vella ahead of the Consecration.

He said the Act of Consecration is an expression of deepest trust in, and devotion to, the Blessed Virgin Mary, adding that it is not a magic trick which will end all wars. 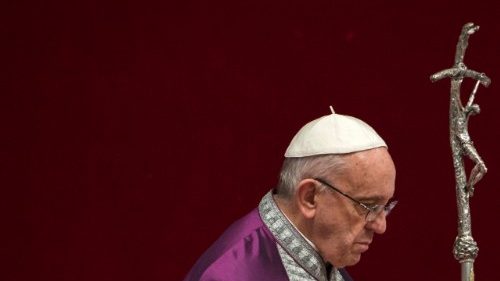 Pope to Bishops: Consecration of Russia and Ukraine ‘to implore peace’

Here below is the full transcript of the interview:

Q: Fr. Kirill, what is the importance of the Pope's act of consecration to Mary?

Already before the Holy Father announced that he would dedicate or consecrate Russia and Ukraine to the Immaculate Heart, a number of our believers had already asked the Bishops to do this Act of Consecration, because this is an act of deepest trust and devotion of the people to Mary as their mother in faith, the Mother of the Church.

And so, I believe that this Act shows the deepest hope that people have. It is not a magic act that will by some miracle transform the situation, but we believe that it can change people's hearts to seek a peaceful solution for this tragedy.

Q: How are Russian Catholics living this moment?

We, like all people in Russia, are deeply unsettled and shocked by what is going on, because literally no one suspected that something like this would happen.

But, as Catholics, of course, we believe that there is God’s will about what is going on, and there is a revelation of what is right and what is wrong.

And we feel deepest trust the Lord—through this sacrifice which is unfortunately going on—that He will lead us to understand the necessity of peace and dialogue, and the necessity to understand, as the Holy Father says, that we live in one, single, small world, and we cannot divide it into different parts and be against one another.

Q: Is it an Act that concerns only Catholics, or also other people?

Or course, this Act of Consecration is very closely tied with the Fatima private revelation of Our Lady, and the Russian Orthodox Church is officially quite suspicious toward this Fatima revelation, especially about the conversion of Russia.

But we believe many believers will understand that this Act on the part of the Catholic Church is not to say that we doubt the authenticity of faith of other Christians and other believers in our homeland. Rather, we actually invite other people to be with us in this moment. And I hope that they will understand.