Pope visits Ukranian children in Rome, calls for the war to end

Pope Francis on Saturday met representatives of the Italian Radio Transceivers’ Federation Citizens’ Band who cooperate with the government’s Civil Protection Department during emergencies and disasters. The group is also serving refugees fleeing the war in Ukraine.

“We hope and pray that this war - shameful for all of us, for all of humanity - will end as soon as possible: it is unacceptable; each additional day adds more death and destruction.”  Pope Francis used the strong language to denounce the Russian invasion of Ukraine on Saturday when he received in the Vatican some 700 volunteers of the Italian Radio Transceivers’ Federation Citizens’ Band.  Known by its Italian acronym FIR CB, its volunteers guarantee radio links at the municipal, provincial, regional and national levels using amateur radio frequencies called the Citizen’s Band, CB.

Expressing appreciation for their work he said, “You put your passion as radio amateurs at the service of society. You have turned it into an effective tool for civil protection and solidarity with the neediest and most fragile people and the most vulnerable social groups. This is very nice: a personal passion that becomes social service. It is the principle of gifts, of talents, put to good use for the common good.”

“We hope and pray that this war - shameful for all of us, for all of humanity - will end as soon as possible: it is unacceptable; each additional day adds more death and destruction.”

Congratulating them on their 50 years last year, he said, “You too are part of the vast and multiform movement of Italian volunteering, which I never cease to appreciate and which deserves to be encouraged and supported.”

He commended the speed of their interventions, saying it is due to the radio that overcomes barriers but also their effective network.  “In fact,” he said, “it is not an individual action, your strength lies precisely in your capillary presence in the territory and in the possibility of circulating news and information very quickly and everywhere.”

Another essential aspect of their service is freedom and independence. “It is essential to maintain freedom, to be truly at the service of people, of the common good.

While thanking FIR members for their service also to refugees fleeing the war in Ukraine, he hoped and prayed that the “shameful” war will end as soon as possible.

“Aim for the common good, never for partisan interests. Only one preference: the poor, the defenceless, the marginalized are to have the first place.”

The Holy Father noted that many people have mobilized to help the refugees such as ordinary people in neighbouring countries, but also in Italy, where thousands of Ukrainians continue to arrive. “Your contribution is precious, it is a concrete, artisanal way of building peace,” he said, adding that Europe is responding to the war in Ukraine not only at the level of the highest institutions but also at the level of civil society, of voluntary associations like FIR CB.  “This way of reacting is fundamental and indispensable, it regenerates the human and social fabric, in the presence of a wound as serious and as great as that caused by the war.” 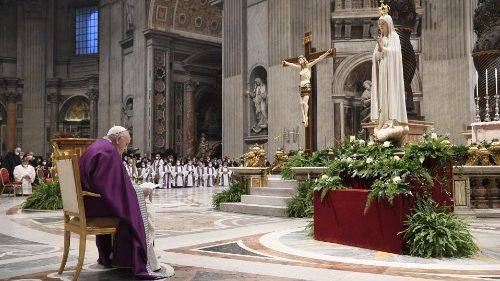 Pope: ‘War of aggression against Ukraine is inhuman and sacrilegious’

He said Ukrainian refugees need to be helped not only now but also later when the memory of the war fades because at that time they will have more difficulties than now.

In conclusion, Pope Francis urged the volunteers to “always keep freedom and solidarity together”. “And aim for the common good, never for partisan interests. Only one preference: the poor, the defenceless, the marginalized are to have the first place,” he added.

Posted by Deacon Mike Talbot at 10:33 AM