even though it's a Friday in Lent, today we can eat meat; its a Solemnity!!

Good news! You can eat a cheeseburger on Friday, March 25. Here’s why 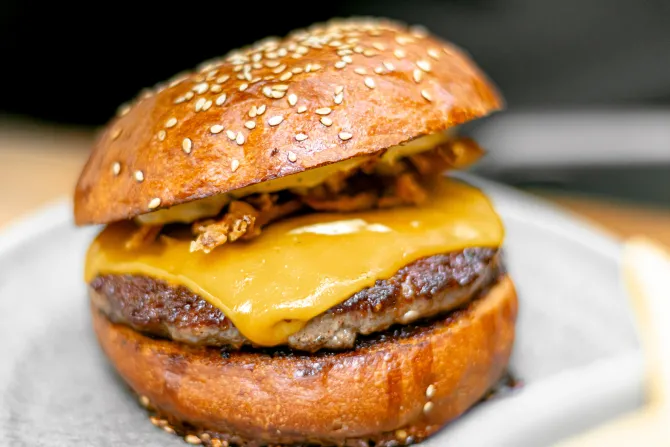 Just when you think you’ve got the Lenten rules down pat, you learn something new.

For instance, you probably already are well aware that Catholics are called to abstain from eating meat on all Fridays throughout Lent.

But did you know that this requirement is suspended when a solemnity of the Catholic Church falls on a Lenten Friday?

What’s a “solemnity”? It is a feast day accorded special, highest-ranking importance by the Church. The list includes Easter, Pentecost, the Assumption of Mary, All Saints’ Day, and Christmas.

Another one is the Solemnity of the Annunciation, which is March 25.

Because it falls on a Friday in Lent this year, the abstinence requirement doesn’t apply.

In other words: You are free to enjoy a cheeseburger or a juicy steak — guilt-free (unless you’re dieting, that is.)

Don’t want to take our word for it? See Canon 1251 of the 1983 Code of Canon Law. It states: “Abstinence from meat, or from some other food as determined by the Episcopal Conference, is to be observed on all Fridays, unless a solemnity should fall on a Friday. [Emphasis added.] Abstinence and fasting are to be observed on Ash Wednesday and Good Friday.”

The feast of the Annunciation began to be celebrated on this day during the fourth and fifth centuries, soon after the date for celebrating Christmas was universalized throughout the Church. This feast celebrates the Incarnation of the Second Person of the Trinity and the salvation of all mankind.

This year, the solemnity coincides with an historic event: Pope Francis’ consecration, with the bishops around the world, of Ukraine and Russia to the Immaculate Heart of Mary. The pope has asked the faithful worldwide to join him.

Posted by Deacon Mike Talbot at 10:02 AM

Labels: Annunciation, Feasts of the Church