So Cardinal Mahony decides to opine as he weighs in, fwiw

The United States Conference of Catholic Bishops gathers from Monday to Thursday in Washington, D.C., for its Fall Plenary meeting. In an interview with Vatican News, Cardinal Roger Mahony sheds some light on a document on the Eucharist that is on the agenda.

The Mystery of the Eucharist in the Life of the Church is the title of a document on which the Bishops of the United States will vote during its Fall Plenary this week. This document sparked debate among the Bishops themselves during their plenary meeting in June.

In September, Cardinal Roger Mahony, Archbishop emeritus of Los Angeles, wrote a letter to his brother bishops expressing his thoughts on the proposed document. In an interview with Vatican News, the Cardinal helps us understand the causes of some of the debate over this document.

I think it's unfortunate that we're even having this document before us because recall this topic came up at the Ad limina visit we had last January 2020 before Covid hit. The Holy Father, of course, is always, always looking for the path of encounter and dialogue to deal with issues like this, especially among the Bishops. And then Cardinal Ladaria, Prefect of the Congregation for Doctrine of the Faith, sent a quite lengthy letter to the Bishops of the United States, at the Holy Father’s urging, in which he outlined the process for us to go through. It was a wonderful three-step process in that letter, in which we would meet regionally for maybe 2 or 3 days together. And really come to know each other, to understand what was going on, what our differences were. We didn't do that because of Covid. If we had done it I think we would be in a far different situation. And if we had really had this honest dialogue among ourselves and got to understand each other's positions and then acted as the communion of Bishops with our unity, we could have found a path forward. I believe we would have decided we do not need this document.

Remember this document was intended primarily to go after and penalize Catholic legislators. However, the Holy See reminded us that the Bishops’ conference has no power to mandate something binding on every bishop and every diocese in the country or any country without being approved by the Holy See. The document of any kind should be at the very end of the process. That's why I am so unsettled about this document that we have before us.

First of all, this document is totally unnecessary because at our June meeting we also approved a path forward for Bishop Andrew Cozzens and his Committee on Evangelization, which will begin after the holidays – a two-year intensive program of revitalization through the Eucharist ending in 2024 with a National Eucharistic Congress. So, we already have in place this important piece. I think the document as we have it is being passed just as we come up on the holiday season, no one is going to read, it is not something that can be put into a pamphlet form of teaching document. It will never have any impact because, right after the holidays, we’re getting into this Eucharistic Revival, which is what we should be doing in the first place. 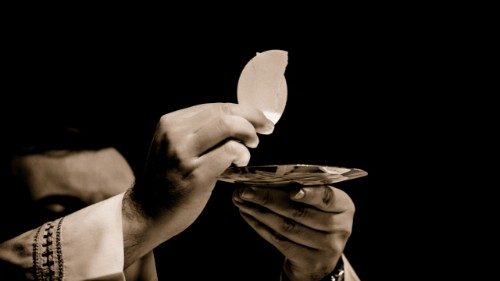 US Bishops General Assembly to focus on reviving the Eucharist

Cardinal Ladaria to US Bishops: Debate on Communion and abortion should not lead to division

You’ve brought up the fact that the original debate that the document sparked was definitely about the fact that it was concentrating perhaps on targeting a message to pro-choice politicians and yet Catholics in the United States and other places in the world have had to endure a lot of revelation about scandalous behaviour regarding priests and Bishops. Why haven't we heard something similar against these grave sins against communion?

Precisely. First of all, we are a democratic republic. Our country’s path is one of separation of church and state. And so, it’s a very difficult position for politicians, Catholics, who are pressured by some in the Church to make all of the decisions based on Catholic Church doctrine. That is very difficult, it’s almost impossible. If you would want to say that any elected Catholic, or any Catholic judge who at any time has ever voted for or issued a decree or a judgment in any way whatsoever that somehow allowed abortion in some form or another, you have got maybe hundreds of thousands of people right there. That is simply unworkable in a democratic republic.

What I think we have failed to do is realize the good faith of our Catholic legislators. And I was thrilled on June 18th, 60 Catholic Members of Congress, issued a statement of principles. I read it through two to three times, and I said, “This is us! This is the Church!” They want to collaborate with us in many ways and they gave a whole list of ways we could collaborate beginning with reducing as much as possible the need for abortion and the occurrence of abortion. When I read it, I said, “This is the pathway to constructive dialogue. They want to help us in their rule to do what we want to do. And it’s amazing! And so, it prompted me to do an open statement to my brother bishops because no one's ever heard of this and it’s precisely the constructive dialogue that Pope Francis insists. And they started it. They gave us the open door. And they quoted heavily from Church teaching. But their sincerity, their desire to work together with us was astounding. And I just hope instead of worrying about documents, we enter into the dialogue and start working with them.

That goes back to the synodal process that the Holy Father is offering to the church at this time. Again, talking about the Sacrament of Eucharist as communion among believers. It seems that those believers who find themselves in high levels of government in the United States are willing to sit down and talk. So how can we encourage the building up of this type of communion in order to avoid the division that seems to be caused?

In the synodal process that we are now beginning, what is the number one thing the Holy Father has in all those documents? Listening to each other. Reflecting. Discernment. What a wonderful vehicle. And we haven't done that. And so to be honest with you, I don't see anything is going to happen with this document or next week in Washington, D.C., that is going to bring about this unity. I think what’s going to happen is we will pass this. Hopefully, we will accept the offer of the Catholic Congress members and move forward with them after the holidays, with the new Eucharistic revival. And those elements will bring together the unity and communion that we all want.

Posted by Deacon Mike Talbot at 9:57 AM