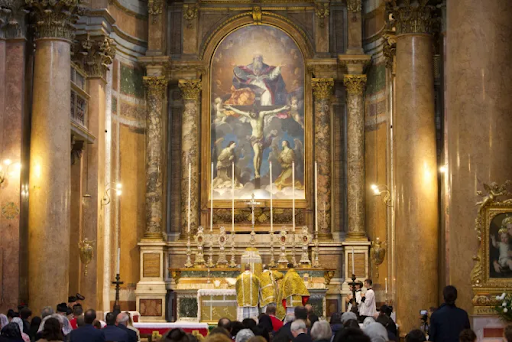 The vicar general for the Diocese of Rome has banned the celebration of the Traditional Latin Mass during the Easter Triduum in his implementation of Pope Francis’ motu proprio Traditionis custodes.

In a letter dated Oct. 7, but made public on several blogs Nov. 9, Cardinal Angelo De Donatis said that Mass could continue to be celebrated according to the 1962 Roman Missal at five churches in Rome on all days except from the evening of Holy Thursday to the evening of Easter Sunday, the period known as the Triduum.

De Donatis also stated that no other sacraments or sacramentals may be celebrated according to the pre-Vatican II missal except the Mass.

The diocesan press office confirmed on Nov. 10 that the letter, addressed to the priests and faithful of the Diocese of Rome, was authentic.

As pope, Francis is also the bishop of Rome, but because the pope has many other responsibilities, the day-to-day care of the Diocese of Rome is entrusted to the vicar general, whose full title is Vicar General of His Holiness.

A vicar general is given, by canon law, executive power over the diocese in all administrative acts except those reserved to the bishop. In the Diocese of Rome, the cardinal vicar functions like a de facto diocesan bishop.

Rome diocese’s guidelines were issued in response to Pope Francis’ motu proprio Traditionis custodes, published in July, which placed tight restrictions on Mass using the 1962 Roman Missal, known variously as the extraordinary form of the Roman Rite, the Tridentine Mass, and the Traditional Latin Mass.

In a letter to the world’s bishops explaining his decision, the pope said he felt compelled to act because the use of the 1962 Missal was “often characterized by a rejection not only of the liturgical reform, but of the Vatican Council II itself, claiming, with unfounded and unsustainable assertions, that it betrayed the Tradition and the ‘true Church.’”

Responding to the pope’s motu proprio, the cardinal vicar of Rome said “it seemed fitting to continue to exercise a lively pastoral charity towards the faithful” who wish to participate in the Traditional Latin Mass.

He said that all priests in the diocese who sought to celebrate Mass according to the 1962 Missal must be authorized in writing by the diocesan bishop, as stipulated in Traditionis custodes.

The cardinal designated the pastor of Santissima Trinità dei Pellegrini, a church run by the Priestly Fraternity of St. Peter (FSSP), as responsible “pro tempore” (for the time being) for the “dignified celebration of the Eucharistic liturgy, as well as the ordinary pastoral and spiritual care of the faithful.”

The readings during Traditional Latin Masses must be proclaimed in Italian according to the 2008 translation by the Italian bishops’ conference, De Donatis’ letter said.

He added that with Pope Francis’ motu proprio, “it is no longer possible to use the Roman Ritual and the other liturgical books of the ‘ancient rite’ for the celebration of sacraments and sacramentals (e.g., not even the Ritual for the Reconciliation of Penitents according to the ancient form).”

Issued with immediate effect on July 16, Traditionis custodes (“Guardians of the tradition”) made changes to Benedict XVI’s 2007 apostolic letter Summorum Pontificum, which acknowledged the right of all priests to say Mass using the Roman Missal of 1962.

With Traditionis custodes, Pope Francis said that it is now each bishop’s “exclusive competence” to authorize the use of the Traditional Latin Mass in his diocese.

Since the motu proprio’s promulgation, some bishops have said that priests may continue to offer the Traditional Latin Mass in their dioceses, while others have banned it.

Posted by Deacon Mike Talbot at 10:43 AM