And child labor is still a thing

Pope Francis addresses participants in an international conference that discusses the need to eradicate child labour, and calls for coordinated initiatives and joint efforts at all levels to fight the scourge.

Using strong words to decry the exploitation of children in the production processes of the globalized economy for the profit and gain of others, Pope Francis on Friday reiterated the Church’s commitment to continue to promote and coordinate initiatives to protect children, for the good of children themselves and for all humanity.

His message upholding the right to health, education, and a future for all children across the globe was addressed to participants in an International Conference promoted by the Vatican COVID-19 Commission of the Dicastery for Promoting Integral Human Development, in collaboration with the Permanent Mission of the Holy See to the FAO, the UN’s Food and Agriculture Organization. 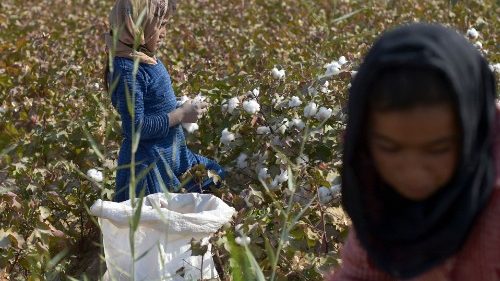 Reversal of a downward trend

Entitled “Eradicating Child Labour, Building a Better Future,” the conference is held at a time in which the elimination of child labour has stalled for the first time in 20 years with some 160 million children suffering of the situation that is exacerbated by the pandemic. It also falls in the International Year for the Elimination of Child Labour: one of the UN Sustainable Development Goals.

The Pope noted that the safeguard of children’s fundamental rights is crucial for the present and future of humanity: “The way we relate to children, the extent to which we respect their innate human dignity and their fundamental rights, expresses the kind of adults we are and want to be and the kind of society we want to build.”

He remarked on the paradox of galloping technological innovations side by side with the persistence of the use of children in work activities in every part of the world.

“This puts their health and mental and physical well-being at risk and deprives them of the right to education and to live their childhood with joy and serenity. The pandemic has further aggravated the situation,” he said.

Children exploited for the profit and gain of others

The Holy Father pointed out that child labour is not to be confused with the small domestic tasks that children may perform as part of family life: “Child labour is something else entirely! It is the exploitation of children in the production processes of the globalized economy for the profit and gain of others.”

Child labour, he said, denies children's “right to health, education and harmonious growth, including the possibility to play and to dream.”

“It is the robbery of the future of children, and therefore of humanity itself. It is a violation of human dignity,” he said.

Distortions of the current economic system

He pointed to extreme poverty, lack of work and the consequent desperation of families as the factors that most expose children to labour exploitation, and said that in order to eradicate this scourge, a joint effort is needed to “eradicate poverty, to correct the distortions of the current economic system, which concentrates wealth in the hands of the few.”

In this perspective, he called on states and business actors “to create decent work opportunities with fair wages that allow families to meet their needs without their children being forced to work.”

He also called for joint efforts “to promote quality education in every country that is free for all, as well as a health care system that is accessible to all without distinction.”

“All social actors are called upon to combat child labour and its causes,” the Pope said, noting that the participation in this Conference of representatives of international organizations, civil society, business and the Church “is a sign of great hope.”

A question of civilization

Pope Francis concluded urging the Vatican institutions to continue in its work to facilitate and coordinate initiatives and efforts in the fight against child labour and thanking all participants for their commitment to this cause, which he described as a true question of civilization.

Let us always keep in mind the words of Jesus in the Gospel, he said: “Whatever you did for one of the least of these brothers of mine, you did for me.”

Posted by Deacon Mike Talbot at 9:20 AM