Ahead of Papal trip to Cyprus

Cyprus Church awaits the Pope with joy, love and synodality

Ahead of Pope Francis' visit to Cyprus and Greece, 2-6 December, Cypriot priest Father Ibrahim Khita of Limassol spoke to Vatican News about how they are preparing for the papal visit.

“We hope that we will have new life, a good life full of peace and full of love.”  Cypriot Maronite priest Father Ibrahim Khita made the comment, expressing what all the people of Cyprus expect from the visit of Pope Francis to them, December 2 to 4.

From Cyprus, the Holy Father will proceed to Greece before flying back to Rome on December 6, in what is the 35th foreign apostolic visit of his pontificate.

Father Khita, who is parish priest of St. Charbel Church in Limassol, some 88 kilometres southwest of the capital Nicosia, told Christine Seuss that they started the preparations 3 weeks after the announcement of the papal visit.

Pope is coming for everyone

They have set up 3 committees with the Apostolic Nuncio and his charge d’affaires is heading the Coordination Committee that oversees the entire preparation.

Father Khita heads the Liturgical Committee, which is in charge of the Pope’s Mass at GSP Stadium in Nicosia on 3 December. The Media Committee, he said, is working hard and doing a good job.

For the past week, all the committees have been working “day and night” to complete the preparations “with joy and love” in the spirit of synodality.

Father Khita said they are trying to live this synodality together, not as separated Churches because Jesus is one and all are united in Him.  In this regard, the priest pointed out that Pope Francis in his video message on Sunday to the people of Cyprus said that he was coming “not just to see the Catholics but to see the Catholics, the Orthodox, the migrants” and everyone.

As they are approaching the day of his arrival, they “need to be one in Jesus Christ”.  The message of the Holy Father is for every Christian and human being to live a life of love and peace among the people.  Cypriots hope that they will have a new and good life full of peace and love. 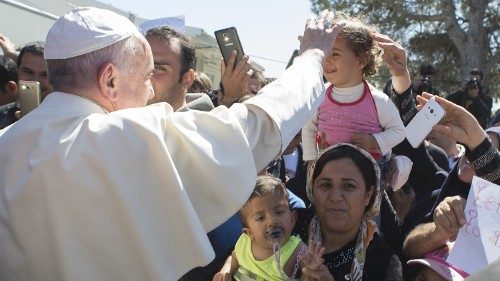 Pope sends video message ahead of journey to Cyprus and Greece

Overview of the Church in Cyprus ahead of Pope's visit

Itinerary released for Pope's journey to Cyprus and Greece

The Pope’s 5-day visit to the two Mediterranean countries includes stops in Nicosia, in Cyprus, the Greek capital, Athens and the Greek island of Lesbos, where he will visit refugees and migrants, as he did in 2016.

In the footsteps of the apostles

This will be the second visit by a Pope to Cyprus after that of Pope Benedict XVI in 2010.

The logo of the Cyprus visit represents the map of the island, with Pope Francis and Saint Barnabas, the patron saint of the island and companion of Saint Paul, in the foreground. An olive branch and an ear of wheat tied together symbolize peace and fellowship. The theme of the trip is “Comforting each other in the faith” (1Th 5, 11), which recalls the meaning of the name of Saint Barnabas, “son of consolation” (cf. Act 4,36).

Eighty percent of Cyprus’ 850,000 people are Christians, with Catholics numbering some 38,000, or about 4.47% of the population. Muslims make up 2%. The vast majority of Cypriots identify as Greek Orthodox. Many of the Christians trace their roots back Crusaders who settled there after the fall of Jerusalem in the 12th century.

St. Paul stopped off in Cyprus in the first century AD and converted the island’s Roman governor Sergius Paulus to Christianity.

Pope Francis begins the some 42-hour visit to Cyprus on Thursday. He will land at Larnaca airport at 3:30 pm, where he will be given an official welcome. He will later meet priests, consecrated persons, deacons, catechists, and members of Church associations at Nicosia’s Maronite Cathedral of Our Lady of Grace. At 5:15 pm he will be welcomed by the Cypriot President at his palace in the capital, where he will later address local authorities, civil society and the diplomatic corps.

On Saturday, the Pope leaves for Athens, Greece, the second leg of this apostolic journey.