A Catholic Mass in Florida is the first Thanksgiving

The first Thanksgiving in America was a Catholic Mass 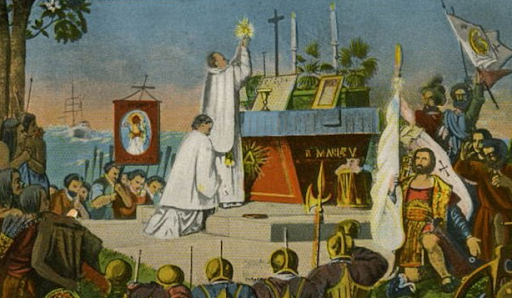 And it happened 50 years before Plymouth!

Did you know that the first “thanksgiving” meal in the United States may not have been celebrated by the Pilgrims in Plymouth, but by Spanish settlers, in what became Florida? And that first “Thanksgiving” was Eucharistic!

“When the first Spanish settlers landed in what is now St. Augustine on September 8, 1565, to build a settlement, their first act was to hold a religious service to thank God for the safe arrival of the Spanish fleet… After the Mass, Father Francisco Lopez, the Chaplain of the Spanish ships and the first pastor of St. Augustine, stipulated that the natives from the Timucua tribe be fed along with the Spanish settlers, including Don Pedro Menendez de Aviles, the leader of the expedition. It was the very first Thanksgiving and the first Thanksgiving meal in the United States.”

The Spaniards, with food that they brought with them on the ship, prepared the communal meal. According to records, the meal would have consisted of salted pork, garbanzo beans, ship’s bread and red wine.

This account of the first “thanksgiving” reflects what was found in Father Francisco’s memoirs. In it we read, “the feast day [was] observed . . . after Mass, ‘the Adelantado [Menendez] had the Indians fed and dined himself.‘”

The feast celebrated by the Spaniards was that of the Blessed Virgin Mary’s birthday, a day in the Church calendar that follows nine months after the feast of the Immaculate Conception of Mary on December 8 (which just happens to be the patronal feast of the United States of America).

The meal “may have also included Caribbean foods that were probably collected when Menéndez stopped to regroup and resupply at San Juan Puerto Rico before continuing to Florida… If the Timucua contributed, it would likely have been with corn, fresh fish, berries, or beans.”

Additionally, before the Mass was celebrated, “Father Francisco López, the fleet chaplain…came ashore ahead of Pedro Menéndez de Avilés, the leader of the founding expedition, and then went forward to meet Menéndez holding a cross… Menéndez came on land, knelt and kissed the cross.”

This historical event reminds us that the Eucharist (from the Greek that literally means “thanksgiving”) is the primary way to offer thanks on Thanksgiving Day,followed by a meal shared in a spirit of fraternity. Let God be a central part of your holiday! As Americans this is our heritage, one that we hope to pass on to the next generation.