The Pope and the Prez; discussed lots of things; did they discuss the Catholic teaching on life, marriage, etc.? 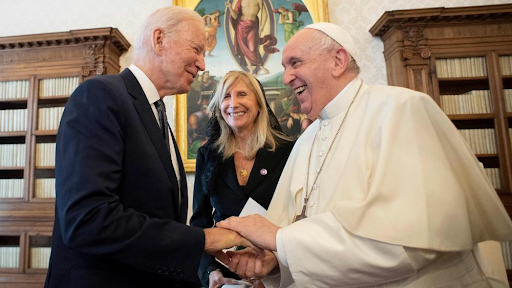 Pope Francis received the President of the United States of America, Joseph Biden, in audience on Friday. The Holy Father and President Biden discussed, among other things, migration, the protection of human rights, and the Covid-19 pandemic.

On Friday morning, Pope Francis met with the President of the United States of America, Mr. Joseph Biden, in the Vatican Apostolic Palace. The US leader later met with Vatican Secretary of State, Cardinal Pietro Parolin, accompanied by the Secretary for Relations with States, Archbishop Richard Paul Gallagher.

A Holy See Press Office communiqué said that during the cordial talks, they dwelt on their common commitment to the protection and care of the planet, the health situation and the fight against the Covid-19 pandemic, as well as the issue of refugees, and how to provide assistance for migrants.

Both parties also spoke about the protection of human rights, including the right to freedom of religion and conscience.

Finally, the talks enabled an exchange of views on some matters regarding the current international situation, also in the context of the G20 summit in Rome, and on the promotion of peace in the world through political negotiation.

President Biden arrived at Rome’s Fiumicino airport on Friday morning. Together with other Heads of States and representatives of important international organizations, Biden is scheduled to take part in the G20 Summit to be held on 30–31 October.

During the day, Biden will meet with the Italian President, Sergio Mattarella and Prime Minister Mario Draghi. Later on Friday, Biden is set to meet with French President Emmanuel Macron.

The US President will travel to Glasgow on Monday to attend COP26, the UN Climate Change Conference.