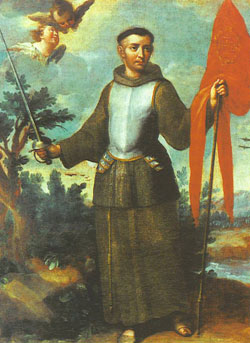 St. John was born at Capistrano, Italy in 1385, the son of a former German knight in that city. He studied law at the University of Perugia and practiced as a lawyer in the courts of Naples. King Ladislas of Naples appointed him governor of Perugia. During a war with a neighboring town he was betrayed and imprisoned. Upon his release he entered the Franciscan community at Perugia in 1416. He and St. James of the March were fellow students under St. Bernardine of Siena, who inspired him to institute the devotion to the holy Name of Jesus and His Mother. John began his brilliant preaching apostolate with a deacon in 1420. After his ordination he traveled throughout Italy, Germany, Bohemia, Austria, Hungary, Poland, and Russia preaching penance and establishing numerous communities of Franciscan renewal. When Mohammed II was threatening Vienna and Rome, St. John, at the age of seventy, was commissioned by Pope Callistus III to preach and lead a crusade against the invading Turks. Marching at the head of seventy thousand Christians, he gained victory in the great battle of Belgrade against the Turks in 1456. Three months later he died at Illok, Hungary. His feast day is October 23. He is the patron of jurists.