Pope Francis expresses his closeness to people hit by flooding in Vietnam and the Italian island of Sicily, urges civil authorities in Haiti to protect people as gang-related violence spikes, and hopes COP26 will produce effective solutions to climate change.

As he does most Sundays, Pope Francis turned his thoughts to current events following the Angelus prayer with pilgrims in St. Peter’s Square.

His first appeal was for flood-hit populations in Vietnam, where at least one person has died and over 7,000 people have been evacuated.

“My prayers and thoughts go out to the many families who are suffering, as well as my encouragement for the civil and local Church authorities who are working to respond to this emergency,” said the Pope.

The flooding in central Vietnam was set off by Tropical Depression “Invest” which moved across the Southeast Asian nation.

Pope Francis also expressed his closeness to people on the southern Italian island of Sicily, which has seen bad weather over the past week.

A “medicane” – or Mediterranean hurricane – tore through the eastern part of Sicily, and left at least three people dead.

Do not abandon Haiti

The Pope then turned his attention to the Haitian people, who are “living in borderline conditions.”

“I ask the authorities of various nations to help this country, and to not leave them alone,” he urged, asking everyone to pray for the people of Haiti.

“Let us not abandon them,” the Pope repeated.

Violence and gang-related activity has spiraled out of control in recent months, following the assassination of President Jovenel Moise.

In one instance, 17 Christian missionaries have been kidnapped by a powerful gang in the capital of Port-au-Prince, which is demanding a ransom of US$17 million. Negotiations for their release are ongoing. 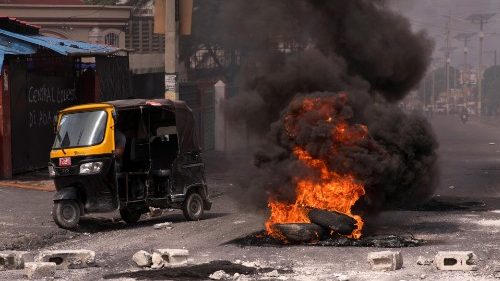 Pope Francis also recalled the opening on Sunday evening of the COP26 climate summit in Glasgow.

Over 30,000 activists, political leaders, journalists, and others are gathering in the Scottish city to kick start efforts to combat climate change and limit global warming.

“Let us pray that the cry of the earth and the cry of the poor might be heard,” said the Pope. “May this encounter give effective responses, offering concrete hope to future generations.”

Posted by Deacon Mike Talbot at 9:17 AM