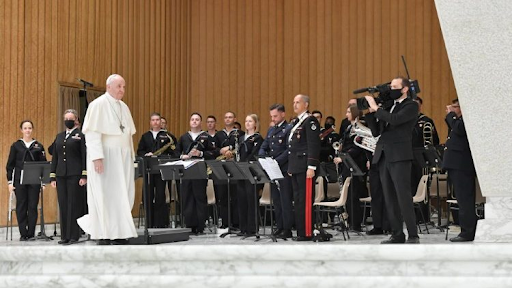 Pope at Audience: Freedom is born in God’s love, grows in charity

At the Wednesday General Audience, Pope Francis continues his catechesis on St Paul’s Letter to the Galatians, emphasising that Christian freedom is expressed in serving others.

Recalling that, through Christ, “we have passed from slavery of fear and sin to the freedom of God’s children,” Pope Francis continued his catechesis on St Paul’s Letter to the Galatians by offering a deeper understanding of what is at the heart of Christian liberty.

Freedom, he said, is very different from license; it is not found in giving in to our own selfish desires, but instead leads us to serve others. “True freedom,” the Pope said, “is fully expressed in love.”

This, however, leads us to “the paradox of the Gospel: we are freed by serving, we find ourselves fully to the extent that we give ourselves; we possess life if we lose it.”

The explanation of this paradox, said Pope Francis, as given by St Paul, “is as simple as it is demanding: it can be explained only by love.”

“It is Christ’s love that has freed us, and again it is love that frees us from the worst slavery, that of self; therefore, freedom grows with love.”

For St Paul, the Pope said, love does not mean doing as you please. If we act simply to please ourselves, we find that we are empty inside. Freedom is full and genuine, and involves us real everyday life, only when it is used for the good of others.

Pope Francis noted that Saint Paul acknowledges that “all things are lawful,” but adds that not all things are useful or edifying. Against the idea of a self-serving freedom, St Paul places the demands of love.

“Freedom guided by love,” explained Pope Francis, “is the only one that frees ourself and others.”

In contrast to the modern notion that “my freedom ends where yours begins,” St Paul sets Christian freedom, the freedom given by Jesus, that does not involve separating oneself from others, but instead being part of a community.

“The social dimension is fundamental for Christians,” Pope Francis insisted, adding that “it enables them to look to the common good and not to private interest.”

This understanding of liberty is especially important in our day, he said, when the pandemic has taught us how much we need one another.

“It is not enough to know this,” Pope Francis said. “We need to choose it concretely every day.”

The Pope concluded his catechesis with an exhortation.

“Let us say and believe that others are not an obstacle to my freedom, but rather the possibility to fully realise it – because our freedom is born from God’s love and grows in charity.”

Posted by Deacon Mike Talbot at 9:25 AM