Finally a funeral for Catholic Priest, POW and future Saint 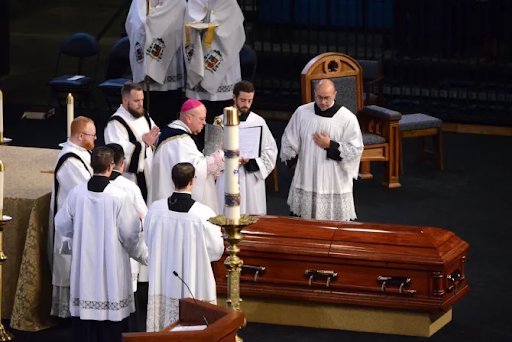 During Wednesday's funeral Mass for Father Emil Kapaun, the Bishop of Wichita called the U.S. Army chaplain who died in a North Korean prisoner of war camp a “humble, and saintly priest.”

“We come to pray for Father's repose, to pay our respects to this fallen soldier, this Medal of Honor recipient, to this humble, and saintly priest. I consider it a singular, but undeserved honor, as the present Bishop of Wichita, to lead us in the Mass of Christian Burial,” Bishop Carl Kemme said Sept. 29 during his homily at a Mass said at Hartman Arena in Park City, Kan., a Wichita suburb.

Fr. Kapaun was a priest of the Diocese of Wichita who served as a military chaplain during both the Second World War and the Korean War. After he was taken prisoner, he served and ministered to other soldiers in a prison camp, where he died May 23, 1951.

His body was identified in March among nearly 900 “unknowns” at the National Memorial Cemetery of the Pacific in Honolulu. His remains were returned to Kansas this week, and they will be interred at Wichita's Cathedral of the Immaculate Conception.

Bishop Kemme thanked God for allowing Fr. Kapaun's “earthly temple, his body, to be discovered, and now be back with us in the land of his birth, in the land of Kansas.”

The bishop thanked those present at the funeral Mass, but in particular Fr. Kapaun's surviving fellow POWs: Herbert Miller, Mike Dowe, Paul Roach, Robert McGreevy, and Bailey Gillespie, telling them that “without your testimony none of us would have known of the heroic witness of your chaplain and friend, Fr. Kapaun.”

He continued, “No doubt the Holy See, and particularly the Congregation for the Causes of Saints, would want me to remember and to remind you that we are not here today to beatify this man. For the work of the church's investigation toward canonization continues. No. We are here today to provide for Father what was not provided for him 70 years ago, a Mass of Christian Burial. And though many of us pray for his intercession, today we pray for his repose, as we do for all the deceased. This is our Christian duty, as we bring him to his new place of rest.”

“And we are blessed to be able to offer this work of mercy for him today, for the one who lived the spiritual and corporal works of mercy in such heroic ways. As we perform this service of our faith, we can rightly reflect on how he conformed his life to Christ, both as priest and as victim. In the case of Fr. Kapaun, we have much to consider.”

Fr. Kapaun imitated the love of Christ, laying down his life for his friends, “all throughout his ministry,” Bishop Kemme said.

“But it reached its fulfillment on May 23, 1951, the day of his personal Calvary, in a dark and lonely place far from here, offering all that he had for those he considered his friends. But that imitation, so powerful then, so clear, began long before that appointed day. It began not far from here, almost 36 years before, in Pilsen, on a farm, in the midst of the prairie,” when Fr. Emil began to live in “a quiet, almost hidden way,” but one that attracted the attention of those around him.

It is “little wonder then that God looked deep into the prairie of Kansas, here in the heartland of our nation, to find a young man who would possess the heart of courage,” the bishop preached.

Fr. Kapaun's ministry as a chaplain was characterized, he said, by “a sacrificial and selfless love of others, especially his beloved fellow soldiers … The accounts of his service to his fellow soldiers in those last months, his fellow POWs, reveal so much of the man whose body we honor today with Christian burial. His love was simple, effective, selfless, and deep.”

“In those last months, weeks, and days he would go at night among the huts of the wounded, the sick, and depressed, to do whatever he could to lift their spirits; he would lead them in prayer, sing a song, tell a joke, pick lice off their bodies, boil water in a helmet to give them a drink of clean water to ward off dysentery, give them some meager amounts of food, even, yes, even by stealing, in short, to do whatever he could to bring light to those who entered a darkness few of us can ever imagine. He was a missionary disciple of hope. And that hope indubitably kept many of those men alive. And evidently, he did all of this day after day in an uncomplaining fashion, never begrudgingly, but happily, dare we say, even joyfully … bringing God's love in simple and profound ways to those who were at risk of losing all hope.”

Bishop Kemme reflected with gratitude on being invited by Fr. Kapaun's family to accompany them to Hawaii to receive and to view the priest's remains.

Allowed reverently to touch the skull of the priest, “many thoughts immediately flooded my mind,” the bishop said: “The skull, it is the physical foundation of so much of what makes us human, our face, the eyes, the ears, the lips, and the mouth. As we were permitted to so gently touch this part of Fr. Kapaun, I found myself reflecting on his face, which we see so often in photos. His was a caring face, a face of quiet strength, a face of character and virtue, a face of a friend, a brother, the face of a comrade, that brought calmness and consolation, that instilled upon those who looked on his countenance, uncommon courage and confidence. His was the face those soldiers would never forget.”

“I thought of his eyes, eyes that saw human suffering in front of him, unimaginable suffering, but eyes that were able to see beyond the dirt and the grime, the lice and the disease, eyes that were able to see through all of that to the person who needed him at that very moment. Those who were so blessed to look into his eyes, I am confident, saw a reflection of Jesus, to whom Fr. Emil had dedicated his life and ministry. I thought of his ears, which heard the cries of the poor, the lonely, the afraid, the ears that listened to the fears and concerns of the soldiers, the ears that heard their sins … And I thought of his mouth and lips, that spoke words that lifted spirits and gave strength and courage, absolution and freedom.”

Bishop Kemme noted that “It was in those places that Father was also baptized, on his forehead, becoming a child of God; and was anointed on the crown of his head as priest, prophet and king; and years later was ordained as a priest of Jesus Christ by the imposition of hands. From this center of who Fr. Kapaun was, flowed the life of a baptized disciple. From there flowed the ministry of a priest, and the dedicated and courageous service of a chaplain.”

The bishop concluded by inviting all to come to Fr. Kapaun's tomb at the cathedral to “reflect on the extraordinary man whose mortal remains we will inter there today. To all who have been inspired by the ministry of his priestly life, we now have a place to be in the company of his mortal remains, and to pray for his intercession.”

“Especially when for us life is dark and lonely, and we are hopeless and afraid, come to his tomb, pray there and sit in the stillness of the beauty and peace that surrounds you, and let God speak to you through the example and the witness of this servant of God, Fr. Emil Joseph Kapaun.”

“And let us all continue to pray for his cause, so that one day soon we will be able to call him the saint we are confident he truly is. Give thanks to the lord for he is good, for his love is everlasting. Chaplain, Fr. Emil Kapaun, Servant of God, pray for us.”

Posted by Deacon Mike Talbot at 10:47 AM