World Day of Migrants and Refugees

Pope Francis recalls the commemoration of the 107th World Day of Migrants and Refugees, with Msgr. Robert Vitillo thanking the Pope for his message of openness and inclusion.

As the Church celebrates the 107th edition of the World Day of Migrants and Refugees (WDMR), Pope Francis is inviting all Catholics to open our hearts to those who have left their homes.

Speaking at the Sunday Angelus, the Pope said all people must “walk together, without prejudice and without fear, drawing near to the most vulnerable: migrants, refugees, displaced persons, victims of human trafficking, and the abandoned.”

The Pope added that everyone is called “to build a more inclusive world, which excludes no one.”

Initiatives in support of migrants

Several Catholic organizations are marking Migrants and Refugees Day through various initiatives, including one promoted by Caritas Italy.

Several dozen participants marched from the Castel Sant’Angelo toward St. Peter’s Square ahead of the Angelus prayer. They were joined by Cardinal Michael Czerny and Fr. Fabio Baggio, the two Undersecretaries of the Vatican’s Migrants and Refugees Section.

Msgr. Robert Vitillo spoke to Vatican News’ Francesca Sabatinelli about the WDMR and the Pope’s message for the event.

He expressed the appreciation of the International Catholic Migration Commission (ICMC), which he heads up as Secretary General, for Pope Francis’ message of the 107th WDMR.

The Pope’s message, released in early May, invited the Church and humanity to journey “Towards An Ever Wider ‘We’”.

Msgr. Vitillo said it is important for the Church to celebrate a day dedicated to migrants and refugees.

“It is so necessary for us to call attention—not only at the level of the international community but especially as faithful Catholics and Christians—that we have a responsibility as Christians to welcome the stranger,” he said. 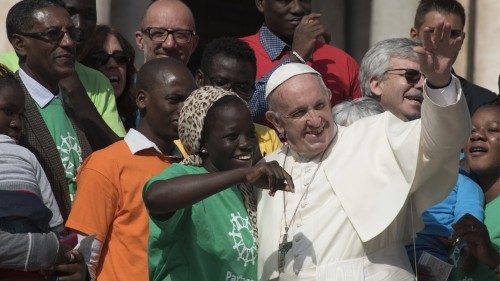 In face of closing borders and rejected asylum-seekers

However, noted Msgr. Vitillo, many societies are becoming more closed to outsiders.

“We see more and more throughout the world that doors and borders are closing and not allowing people to even to make a claim for asylum when they have been victimized by persecution and when their lives are in danger,” he said.

The American priest lamented the closure of US borders and recent treatment of migrants at the US-Mexico border.

“This is the country that received my Italian grandparents, who left Italy because of deep poverty,” said Msgr. Vitillo, “and who were accepted in the United States and then who contributed their talents, as so many other migrants and refugees did there.”

Catholics on front lines of assistance

Msgr. Vitillo added that the ICMC and other Catholic organizations are “in the front line” helping people on the move in all parts of the world.

“And it’s harder and harder for us to do that,” he said, “because many people do not feel the obligation to support the humanitarian assistance that we offer, and to support our protection of refugees around the world, and to help them to begin to develop and to recover the human dignity that God gave them.”