When an Anglican Bishop comes home to Rome

Explainer: What happens when an Anglican bishop becomes Catholic? 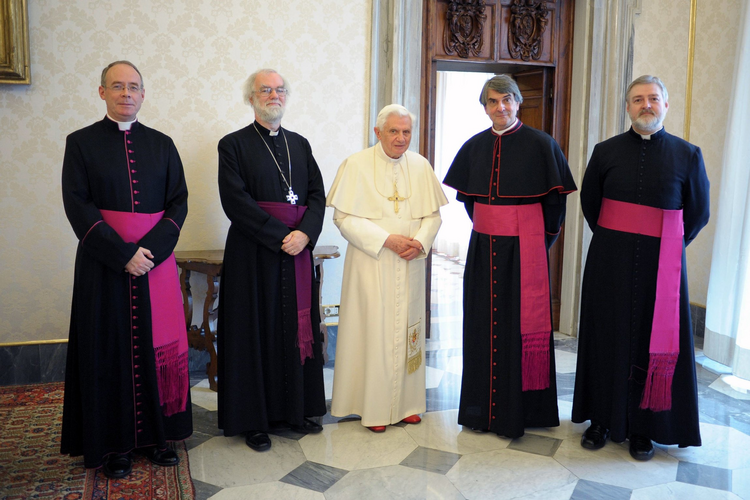 On Sept. 3, an English Christian named Jonathan Goodall unexpectedly announced that he was resigning his office so that he could become a Roman Catholic. But he is no ordinary catechumen: He had served as the bishop of Ebbsfleet in the Church of England for eight years and served as chaplain and ecumenical secretary for the previous archbishop of Canterbury, Rowan Williams. His path is uncommon but not unprecedented: He follows in the footsteps of four other Anglican bishops who joined the Catholic Church over a decade ago.

For many of the faithful on both sides of the Tiber, it might seem surprising to see such a high-profile figure in the Church of England make the swim across. How and why do some Anglican clergy choose to come into full communion with the Catholic Church?

The history of Anglicanism

First, to understand the relationship between the Anglican Communion and the Roman Catholic Church, it is important to recall what precipitated the rift between the two institutions in the first place. For that, you need to go back almost 500 years to 1534, when King Henry VIII broke off from Rome and established the independent Church of England; among his primary reasons for doing so was Pope Clement VII’s refusal to grant an annulment for Henry’s marriage to Catherine of Aragon.

According to James Weiss, professor of religious history at Boston College and an Episcopalian priest, the king was merely attempting to use his royal prerogative in religious affairs the same way other European monarchs did. The rulers of other European countries before and after Henry had the power to appoint bishops independently of the pope, Father Weiss said. In this view, the pope refused the king’s request for political reasons rather than out of any meaningful theological disagreement.

Over the years, a multitude of laws were passed which made it illegal to practice the Catholic faith in Britain. Only in 1791 were Catholics allowed to once again worship legally, and it was not until 1829 that Catholic men could hold a seat in Parliament. To this day, it is unconstitutional for the monarch of the United Kingdom to be a Catholic.

To understand the logistics of the bishop’s decision, it also helps to review the terminology. Anglicanism refers to the religious tradition started by the Church of England, but it is not a unified church. Today there are 41 Anglican churches throughout the world that are autonomous, but they are all in communion with the See of Canterbury.

Despite its official break with Rome, Anglicanism has retained several similarities with the Catholic Church. Most readily apparent is that Anglican church services tend to be conducted very similarly to Catholic liturgies. For example, the Sunday services of both traditions include readings from the Old Testament, the Gospels and other New Testament books; and the Anglican eucharistic prayer uses language almost identical to that of Catholic ones. In most parishes, the priest also wears the same types of vestments as Catholic priests, including a chasuble—the billowing, colorful garment worn as the outermost layer of liturgical clothing.

Likewise, the Anglican church hierarchy is composed of bishops, who perform largely the same role of overseeing their dioceses as their Catholic counterparts. On matters of doctrine, an inter-church dialogue determined that Anglicans and Catholics are almost completely aligned on the theology of the Eucharist.

However, there still remain convictions among some within the Anglican Communion that are at odds with Catholic positions on concepts like sainthood and devotion to Mary.

Patching up the relationship with Rome

After the Second Vatican Council called for ecumenical outreach to other Christians, the Catholic Church opened discussions with the Anglican Communion in an attempt to reconcile the churches’ historical differences. Pope Paul VI had a warm relationship with Archbishop of Canterbury Michael Ramsey, and he created a commission to carry out dialogue between the two churches. The body that resulted from these efforts, the Anglican-Roman Catholic International Commission, is currently engaged in its third set of years-long discussions. The rapport between the two also led to the establishment of the Anglican Centre in Rome, which serves as a sort of embassy for Anglicans to the Vatican.

During the reign of Pope Benedict XVI from 2005 to 2013, a number of Anglican clerics decided to become Catholic as a result of changing dynamics within the Anglican Communion over issues surrounding gender and sexuality. However, while vocal, the number of those who became Catholic was so small as to be almost insignificant, said C. K. Robertson, the canon to the presiding bishop of the Episcopal Church for Ministry beyond the Episcopal Church.

When this handful of prominent Anglican figures became Catholic, it was but one symptom of the difficulty Christian denominations have faced in grappling with the sexual revolution and its aftershocks. Since the 1970s, several Anglican churches have allowed women and, later, openly non-celibate gay men to become priests and bishops. In response, some traditionally minded Anglicans chose to leave the church.

A year after Benedict instituted the ordinariate, five Church of England bishops became Catholics, and the same year, around 100 Episcopal parishes in the United States—priests, congregants and all—did the same. Many in the Church of England interpreted the creation of the Ordinariate as a slight; it seemed like the Catholic Church was giving up on trying to reconcile with Anglicanism. Still, most Anglican churches outside the British Isles did not take much umbrage, Father Robertson said.

Later, in 2016, Pope Francis met with Justin Welby, the current archbishop of Canterbury. In their joint statement, the two leaders admitted that the debate over women’s ordination and other issues that had come up in the last half-century “constitute serious obstacles to our full unity.” Even so, they offered hope for the future, saying that in spite of the hurdles to reconciliation, the two faith leaders remained “undeterred” in their efforts to find common ground.

What does it look like when an Anglican priest or bishop decides to join the Catholic Church today?

In order for Anglicans—lay or clergy—to be received into the Catholic Church by means of the Ordinariate, they must signal their desire to do so in writing. However, there is no need for these people to be re-baptized: The Catholic Church already recognizes Anglican baptisms as valid, as it does for any Christian denomination that uses water, invokes the Trinity and performs the sacrament for the same reasons as the Catholic Church during baptism.

In order to be fully initiated, those Anglicans who wish to join the church are required to study the church’s teaching and receive the sacrament of Confirmation. Some may choose to take the same R.C.I.A. course as other people who may be converting from an entirely different religion, but because so much of Anglican doctrine overlaps with Catholic teaching, they can opt to take a shorter course.

When Anglican clergy become Catholics, they are not automatically eligible for the priesthood (or the bishopric, for that matter). The Catholic Church does not recognize Anglican ordinations as valid. In the Catholic view, an Anglican wishing to become a Catholic priest must be ordained under Catholic auspices.

It is best to think of it in terms of different forms of currency, said Edward Tomlinson, the Catholic pastor of St. Anselm’s Church in Pemsbury, United Kingdom, and the author of the book Understanding the Ordinariate: Catholics of the Anglican Patrimony. “Nobody doubts the legitimacy of a British pound but it is not legal tender in the U.S.A.,” he said in an email. “There one must use dollars. So Anglican [holy] orders are valid within Anglicanism but not within Catholicism.”

Instead, if they wish to serve as clergy in the Catholic Church, former Anglican priests must first undergo background checks (as does anyone who seeks to do ministry in an official capacity in the Catholic Church). Afterward, if a candidate receives approval from the head of their Ordinariate and from the Vatican, they must undertake an academic and pastoral formation program—usually by attending a seminary part-time over the course of two years. Once they go through this initial process, they are finally ordained by a bishop.

Pope Francis: ‘I have never denied Communion to anyone.’ 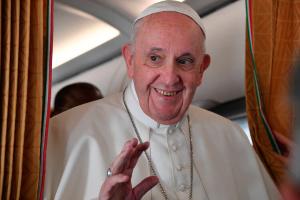 But what about Anglican priests who are married? Goodall, for instance, has a wife and two children. In what may come as a surprise to many Catholics, already-married Anglican priests who join the Catholic Church can be ordained as Catholic priests using the process described above. However, the Catholic Church has taken great pains to stress that this is an exception, not the rule: Ex-Anglican priests who are married must be approved for ordination on a case-by-case basis by the Vatican, and a priest’s wife must agree to go along with the process. If a priest is not already married by the time he becomes a Catholic, he is not permitted to wed afterwards—just like any other Catholic priest.

Higher up the hierarchical ladder, ex-Anglican bishops like Mr. Goodall do not automatically become bishops in the Roman Church. Just as with any other Catholic priest, to become a bishop requires that one be approved by the pope and consecrated by at least one other Catholic bishop.

Posted by Deacon Mike Talbot at 11:18 AM