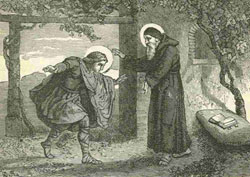 On the death of Clovis, King of the Franks, in the year 511 his kingdom was divided between his four sons, of whom the second was Clodomir. Thirteen years later he was killed fighting against his cousin, Gondomar, leaving three sons to share his dominions. The youngest of these sons of Clodomir was St. Clodoald, a name more familiar to English people under its French form of Cloud from the town of Saint-Cloud near Versailles. When Cloud was eight years old, his uncle Childebert plotted with his brother, to get rid of the boys and divide their kingdom. The eldest boy, Theodoald was stabbed to death. The second, Gunther fled in terror, but was caught and also killed. Cloud escaped and was taken for safety into Provence or elsewhere.

Childebert and his brother Clotaire shared the fruits of their crime, and Cloud made no attempt to recover his kingdom when he came of age. He put himself under the discipline of St. Severinus, a recluse who lived near Paris, and he afterwards went to Nogent on the Seine and had his heritage where is now Saint-Cloud. St. Cloud was indefatigable in instructing the people of the neighboring country, and ended his days at Nogent about the year 560 when he was some thirty-six years old. St. Cloud's feast day is September 7th.