St. Michael the Archangel, defend us in battle 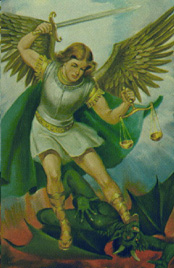 Saint Michael the Archangel is the leader of all angels and of the army of God. This is what the title "Archangel" means, that he is above all the others in rank.

St. Michael has four main responsibilities or offices, as we know from scripture and Christian tradition.

Very little is known about St Michael other than what we know from scriptures, which themselves are sparse.

In Daniel, St. Michael is mentioned twice. The first time as one who helped Daniel, and the second time he is mentioned with regard to the end times of the world when he will stand for the "children of thy people."

His next mention comes in the Epistle of St. Jude, where St. Michael is said to guard the tombs of Moses and Eve and has contended with Satan over the body of Moses.

The final mention is in Revelation, where St. Michael and his angels, do battle with the dragon.

There are other scriptures where St. Michael is implied, but not mentioned by name, such as the angel; who defends the gate to Paradise, who defends against Balaam, and "who routed the army of Sennacherib."

Today, St. Michael is invoked for protection, especially from lethal enemies. He is also the patron of soldiers, police and doctors.