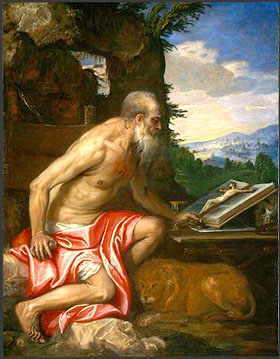 Before he was known as Saint Jerome, he was named Eusebius Sophronius Hieronymus. He was born around 342 AD, in Stridon, Dalmatia. Today, the town, which ceased to exist in Jerome's time, would likely be in Croatia or Slovenia.

The young Jerome was educated by Aelius Donatus, who was a famous Roman grammarian. From him, the young Jerome learned Latin and Greek. Little else is known of his childhood other than his parents were probably well-to-do and Christian. Despite their efforts to raise Jerome properly, the young man behaved as he chose.

Around the age of 12 or so, Jerome traveled to Rome to study grammar, philosophy and rhetoric. It is likely that due to his training in rhetoric, he may have considered a career in law. By his own admission, he quickly forgot his morals. While he was not studying, Jerome pursued pleasure. In particular, he pursued women, even though he knew his behavior was wrong.

To alleviate the feelings of guilt he often felt afterwards, Jerome would visit the crypts in Rome and imagine himself in hell. He did so every Sunday, even though he was not a Christian. Jerome succeeded in frightening himself, but not in changing his ways.

Fortunately, Jerome had as a companion, Bonosus, who was a Christian influence. His influence is part of what persuaded Jerome to become a Christian and change his ways for the better.

In or around the year 366, Jerome decided to become a Christian and was baptized by Pope Liberius.

Now interested in theological matters, Jerome set aside secular matters to pursue matters of the faith. He traveled with Bonosus to Trier where there were schools for him to gain ecclesiastical training.

In 370, he traveled close to home, ending up in a monastery at Aquileia. The monastery was overseen by Bishop St. Valerian, who had attracted some of the greatest minds in Christendom. While in Aquileia, Jerome met Rufinus and the two men became friends. Rufinis was a monk who became renown for his translations of Greek works into Latin. Jerome himself was developing his skills as a translator, a skill he developed during his time in the Roman catacombs, translating the inscriptions on the tombs.

Following his time in Aquileia, Jerome traveled next to Treves, Gaul where he began to translate books for his own use. His goal was to build a personal library.

After a time in Gaul, he returned to Aquileia in 373. While there, Jerome and his friend Bonosus had a falling out and decided to part ways. Bonosus departed for an island in the Adriatic where he would live as a hermit for a time.

Jerome traveled to the east, bound for Antioch by way of Athens.

In 374, Jerome finally reached Antioch, after making several lengthy stops along the way. While in that city, Jerome began writing his first work, "Concerning the Seven Beatings."

During that same year, disease made Jerome ill while taking the lives of some of his companions. It is unclear what disease was responsible, or if different illnesses had taken his friends. During his illness, Jerome had visions which made him even more religious.

Jerome went into the desert to live for four years, living as a hermit southwest of Antioch. He was frequently ill during this time.

After he emerged from his hermitage, Jerome was quickly embroiled in conflicts within the Church at Antioch. This was not something Jerome wanted to be associated with. Jerome made clear that he did not want to become a priest, preferring instead to be a monk or a hermit. But Church officials in Antioch as well as Pope Damasus wanted him to be ordained. Jerome relented on the condition he would not be expected to serve in any ministry and would still be allowed to pursue his monastic life. He was subsequently ordained.

Making the most of his freedom as a priest, Jerome traveled to Constantinople where he studied under St. Gregory of Nazianzus, who was renown as a great theologian.

After St. Gregory left Constantinople in 382, Jerome traveled to Rome for a council of the Church and met Pope Damasus. Following the council, Pope Damsus kept Jerome in Rome and made him his secretary.

While serving as secretary to the pope, Jerome also promoted the ideal of asceticism to everyone around him. Included in this group were women of the city of Rome who wanted to live saintly lives.

Pope Damasus died in 384, and this exposed Jerome to criticism and controversy. Jerome was a sarcastic man of great wit. He became unpopular because of his attitude and made a number of enemies. While Pope Damasus was alive, he could shield Jerome from criticism, but now Jerome faced the vengeance of the enemies he made. Both prominent pagans who resented his promotion of the faith and fellow Christians who lacked his wit attacked him with vicious rumors. Among the rumors were accusations that he was behaving inappropriately with the woman we now know as Paula. At that time, she was one of his students in asceticism.

Paula was a widow with four children who deeply mourned the loss of her husband. Jerome provided counseling and instruction to her and she became a lifelong friend and follower of Jerome, assisting him in his work.

Eventually, Jerome decided to return to the Holy Land to escape the calumny in Rome. He headed east and arrived in Antioch in 386. Shortly after, Jerome was met by Paula, her daughter, and several other followers. The group went first to Jerusalem, then on to Alexandria, Egypt. They settled in Bethlehem and had a monastery built there which included dormitories for women.

Jerome was a hard worker and he wrote extensively defending the virginity of Mary, which some clerics dared to question. He also engaged in several debates against various other heresies including a lengthy battle with his old friend Rufinus. Jerome was easily upset, and even the venerable St. Augustine exchanged words with him. Eventually, Jerome and Augustine repaired their relationship and were able to correspond as friends and colleagues.

Of all the things that made Jerome famous, nothing was so legendary as his translation of the Bible. Jerome began work while he was still in Rome under Pope Damasus. He spent his entire life translating the scriptures from Hebrew and Old Latin.

In the year 404 Paula died, later to become a saint of the Church. Rome was sacked by Alarc the Barbarian in 410. These events distressed Jerome greatly. Violence eventually found its way to Bethlehem disrupting Jerome's work in his final years.

Jerome died on September 30, 420. His death was peaceful and he was laid to rest under the Church of the Nativity. His remains were later transferred to Rome.

His feast day is September 30.