From Belgium, Sunday Saint of the Day 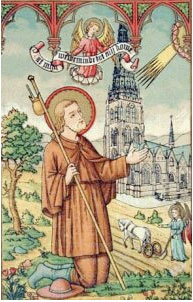 St. Guy of Anderlecht (1012) was born near Brussels. He was poor and uneducated but led an austre life. He gave up and lost what little he had. Returning from a seven year pilgrimage, he took on foot to Jerusalem and Rome, he died in Anderlecht. Miracles were reported at the grave of this 'poor man of Anderlecht'. His feast day is September 12.