Ida, a Category-4 storm with maximum sustained winds of 150 mph, made landfall in Southeast Louisiana on Aug. 29 exactly 16 years after Hurricane Katrina. 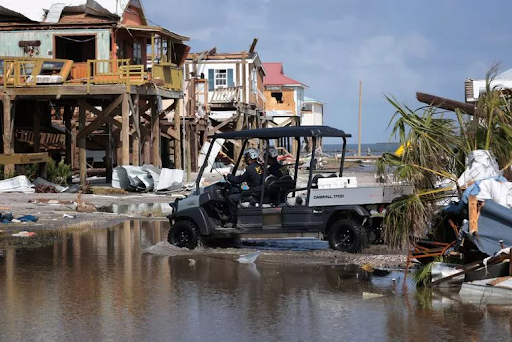 At least one Catholic church near New Orleans opened its doors to serve as an emergency shelter amid widespread power outages, wind damage and flooding caused by Hurricane Ida.

St. Francis Xavier Church in Metairie, the city adjoining New Orleans to the west, served as an emergency overnight shelter, despite having lost electricity, for 34 residents of the seven-story Metairie Towers apartment building across the street, Peter Finney, editor of the Clarion-Herald, the newspaper of the Archdiocese of New Orleans, told the Register.

“Metairie Towers lost its roof. And so, water obviously started peeling into the building. The fire chief came over to see Father Joe Palermo [St. Francis’ pastor] and said, ‘Can you take these people? Just get them out of harm’s way.’ He said, of course, and he opened up the church,” he said, adding that the residents, mostly elderly, were now safely housed with family.

Ida, a Category-4 storm with maximum sustained winds of 150 mph, made landfall in Southeast Louisiana on Aug. 29 exactly 16 years after Hurricane Katrina. The storm proceeded to cause devastation as it worked its way across the eastern United States.

Northeastern states declared emergencies late Sept. 1 and early Sept. 2. Numerous people were killed in New York, and tornadoes did heavy damage to parts of New Jersey as the evening storm caught many off guard with the severity of its rain and wind and resulting flooding.

In greater New Orleans, 95% of the area remained without electricity by press time. Mayor LaToya Cantrell imposed an 8pm to 6am curfew on New Orleans amid widespread power outages. Several deaths have been reported in Louisiana and Mississippi.

Amid the damage, the Archdiocese of New Orleans announced Aug. 30 that all schools and archdiocesan main administrative offices would remain closed until at least Sept. 6. In the nearby Diocese of Houma-Thibodaux, all Catholic schools will remain closed “until further notice.”

According to Finney, the archdiocese was still in the process of assessing damage to parishes, schools and other properties. The power outages and inconsistent cellular service in the area were making reporting of damage difficult. Especially uncertain were how Lafitte, to the south of New Orleans, and some of the counties known as the river parishes, located along the Mississippi River between New Orleans and Baton Rouge, fared.

“I keep going back to Katrina, where you sat in water for two to three weeks, and that was just a game changer. This is more of a wind event. And, right now, it looks okay in most parts of the archdiocese,” said Finney during a Sept. 1 Register Radio interview.

“St. Louis Cathedral had reported some roof damage to the steeples, but it’s certainly structurally fine,” he said. “Virtually every building in the archdiocesan school system got some kind of damage. But, right now, it does not look as though it is tremendously significant … things like roofs, shingles, windows, and some wind-driven rain into the schools. We’re still doing the assessment. So, again, this is just preliminary.”

New Orleans’ Catholic Charities has already begun to respond to needs, along with Second Harvest Food Bank, which is under the Archdiocese of New Orleans and serves 23 civil parishes of Southeast Louisiana. “They have already set up distribution sites, not only for food and water, but also for needed supplies for cleanup and things like that,” said Finney.

“You hate to see any kind of tragedy. But I think, really, we have learned so much over the last 16 years about how to respond quickly, and the programs are in place.”

Archbishop José Gomez of Los Angeles, president of the U.S. bishops’ conference, urged prayers for those affected by the disaster.

“I call on people of goodwill to join me in praying for the safety, well-being and protection of everyone in these impacted areas.

“We also pray in a special way for the first responders, health-care workers and emergency personnel who bring relief, comfort and healing,” Archbishop Gomez wrote.

Catholic Charities USA has said it will direct 100% of the funds raised through texts of “HurrIda” to 41444 to its agencies with residents impacted by Hurricane Ida.