A new Bishop for Brooklyn

POPE FRANCIS NAMES NEW BISHOP OF THE DIOCESE OF BROOKLYN

The Holy Father, Pope Francis, has named the Most Reverend Robert J. Brennan as the eighth Bishop of the Diocese of Brooklyn. The appointment was announced this morning by Archbishop Christophe Pierre, Apostolic Nuncio to the United States.

The Most Reverend Nicholas DiMarzio, Bishop of Brooklyn, who turned 75 years of age on June 16, 2019, had submitted his resignation on that date as required by Canon Law. His resignation was accepted today by Pope Francis.

“In the selection of Bishop Robert Brennan, the Holy Father has called upon a native New Yorker to return to lead the faithful of Brooklyn and Queens. On behalf of the Diocese of Brooklyn, I welcome Bishop Brennan who I have known for many years, with confidence in his ability to lead our Catholic community and build upon the pastoral achievements we have made. It has truly been an honor to serve as Bishop of the Diocese of Brooklyn for 18 years,” said Bishop Nicholas DiMarzio.

“This is a historic moment for the Diocese of Brooklyn which is a very active Diocese, and Bishop Brennan’s energy makes him a perfect choice.  I ask for God’s blessings on this transition so that the work of God, in service to His people, can effectively continue for the more than 1.2 million Catholics throughout Brooklyn and Queens,” continued Bishop Nicholas DiMarzio.

“I came to know amazing people in the Diocese of Columbus and there is a tremendous sadness in leaving them behind. As I prepare for a return to New York, I am ready and eager to embrace the people of Brooklyn and Queens as their pastor. Knowing we are loved by Jesus, we will strive to show others his face, bearing the Joy of the Gospel and the Splendor of Truth. In the end, that’s what it is all about – in Columbus, Brooklyn, and around the world,” stated Bishop Robert Brennan, the current Bishop of the Diocese of Columbus.

Bishop Robert J. Brennan was born on June 7, 1962, to Robert and Patricia Brennan in the Bronx and was raised on Long Island, in Lindenhurst, New York. Bishop Brennan attended Our Lady of Perpetual Help Catholic School in Lindenhurst and St. John the Baptist Diocesan High School in West Islip. He earned a Bachelor of Science degree in mathematics and computer science from St. John’s University in Queens.

Bishop Brennan was appointed the 12th Bishop of Columbus on January 31, 2019, and was installed on March 29, 2019.  Among the highlights of his time in Columbus has been the institution of the Diocesan-wide Real Presence, Real Future evangelization and planning initiative, a process involving clergy, lay ecclesial ministers, parish volunteers, and the faithful. The objective was to determine the best path forward to increase the presence of the Church in the Diocese of Columbus going forward.

Bishop Brennan has served with the United States Conference of Catholic Bishops as a member of the Committee for Catholic Education, the Administrative Committee, and the Priorities and Plans Committee.

A Mass of Installation for Bishop-Designate Robert Brennan will be celebrated on Tuesday, November 30, 2021, at 2 p.m. at the Co-Cathedral of St. Joseph in Brooklyn.

Photo of Bishop Robert J. Brennan, courtesy of the Diocese of Columbus, is attached. 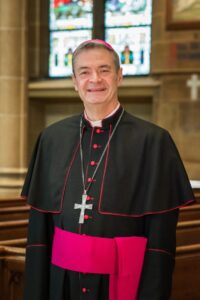