King and Patron Saint of Hungary 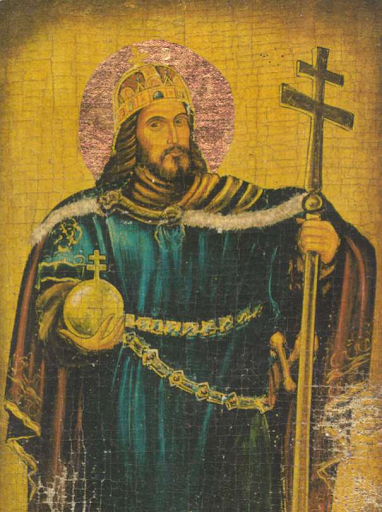 St. Stephen the Great (977-1038), was the son of the Magyar chieftain Geza, Stephen succeeded him as leader in 997. Already raised a Christian, in 996 he wed the daughter of Duke Henry II of Bavaria and devoted much of his reign to the promotion of the Christian faith. He gave his patronage to Church leaders, helped build churches, and was a proponent of the rights of the Holy See. Stephen also crushed the pagan counterreaction to Christianity, forcibly converting the so-called Black Hungarians after their failed rebellion. In recognition of his efforts, Stephen was anoited king of Hungary in 1000, receiving the cross and crown from Pope Sylvester II. The remainder of his reign was taken up with the consolidation of the Christian hold on the region. His crown and regalia became beloved symbols of the Hungarian nation, and Stephen was venerated as the ideal Christian king. Canonized in 1083 by Pope St. Gregory VII, he became the patron saint of Hungary.