In race for another gold, Ledecky relies on grace of God 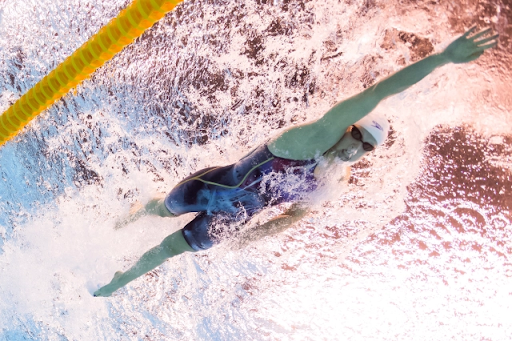 "The Hail Mary is a beautiful prayer and I find that it calms me..."

Agold in the 1,500-meter freestyle at the 2020 Olympics in Tokyo cemented Katie Ledecky’s status at the “Michael Jordan” of swimming. At 24, she set a new Olympic record in the event’s inaugural Olympic race.

Despite some faltering in Tokyo, several of Ledecky’s Olympic and world records still stand. She also picked up a silver medal in the 400-meter freestyle. Her career is what most swimmers only dream of doing.

Her success is inspiring and many wonder how she is able to remain at such a high level of athletic perfection while the world watches. The pressure at the Olympic games is enormous and few can ever understand what the experience might be like.

What is Ledecky’s secret to success? How does she remain calm and collected, knowing that everyone expects her to break another record?

In a 2016 interview with the Catholic Standard she revealed, “I do say a prayer – or two – before any race. The Hail Mary is a beautiful prayer and I find that it calms me.”

Ledecky was born and raised Catholic, attending Catholic schools all the way through high school. Her parents were supportive at an early age of her passion for swimming, encouraging her at the age of six to “just try to make it across the entire length of the pool without stopping.” It was her older brother who inspired Ledecky to start swimming, even though she wasn’t very good at it at the time.

Along with her strong family life, Ledecky credits her education for providing many life lessons that have given her the balance she needed to be successful in the pool. In fact, after winning gold in London, Ledecky went first to visit the Immaculate Heart of Mary sisters in Maryland to thank them for all their support throughout the years. In 2016, she planned to do the same. This did not surprise the sisters at all, for they recognized her strong Catholic faith during her time at school.

Referring to her Catholic education, Ledecky highlighted how it made a huge impact on her swimming career.

“Going to these schools was important to my swimming – my Catholic schools challenged me, they broadened my perspective and they allowed me to use my mind in ways that take me beyond just thinking about swim practices, swim meets and sports.

“Going to these schools also allowed me to make wonderful friends. Friends, teachers and administrators from my schools have all helped me meet my goals in swimming, and in life generally, by being supportive and caring. The importance of balance in one’s life is a lesson I have learned, and one that I hope will help me in   college and beyond.”

In addition to thanking her Catholic schools for the support and encouragement they gave, Ledecky has also helped her local Catholic community in different ways. In 2015, she helped promote the “Walk with Francis” pledge that was organized by the Archdiocese of Washington, D.C. in preparation for the visit of Pope Francis to the United States. In her promotional material, she explains how loving God is not abstract but concrete. and then pledges to support charitable organizations such as Catholic Charities, Shepherd’s Table, and Bikes for the World.

Ledecky continues to defend ready to defend her Olympic title in the 800-meter freestyle on Thursday, and hopes to dominate the pool again.

When she does, she will be relying not only on her hours and hours of practice, but also on the grace of God. Ledecky knows that with God “all things are possible” and that he will give her strength and peace when she needs it the most.