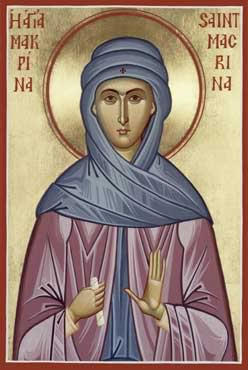 Macrina the Younger was the granddaughter of Macrina the Elder and sister of St. Basil, St. Gregory of Nyssa, and St. Peter of Sebastea. She was well educated, especially in scripture. She was engaged to be married when she was twelve, but when her fiance died, she decided to dedicate her life to God. On the death of her father, she and her mother retired to the family estate in Pontus and lived a life of prayer and contemplation in a community they formed there. Macrina became head of the group when her mother died and lived in Pontus until her death. Her feast day is July 19.