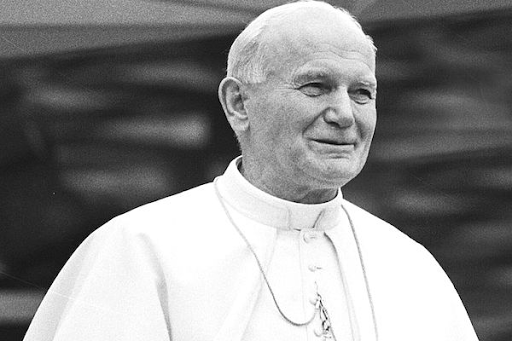 When I think of the Eucharist, and look at my life as a priest, as a Bishop and as the Successor of Peter, I naturally recall the many times and places in which I was able to celebrate it. I remember the parish church of Niegowić, where I had my first pastoral assignment, the collegiate church of Saint Florian in Krakow, Wawel Cathedral, Saint Peter’s Basilica and so many basilicas and churches in Rome and throughout the world. I have been able to celebrate Holy Mass in chapels built along mountain paths, on lakeshores and seacoasts; I have celebrated it on altars built in stadiums and in city squares… This varied scenario of celebrations of the Eucharist has given me a powerful experience of its universal and, so to speak, cosmic character. Yes, cosmic! Because even when it is celebrated on the humble altar of a country church, the Eucharist is always in some way celebrated on the altar of the world. It unites heaven and earth. It embraces and permeates all creation. The Son of God became man in order to restore all creation, in one supreme act of praise, to the One who made it from nothing. He, the Eternal High Priest who by the blood of his Cross entered the eternal sanctuary, thus gives back to the Creator and Father all creation redeemed. He does so through the priestly ministry of the Church, to the glory of the Most Holy Trinity. Truly this is the mysterium fidei which is accomplished in the Eucharist: the world which came forth from the hands of God the Creator now returns to him redeemed by Christ.

The Eucharist, as Christ’s saving presence in the community of the faithful and its spiritual food, is the most precious possession which the Church can have in her journey through history….

…Allow me, dear brothers and sisters, to share with deep emotion, as a means of accompanying and strengthening your faith, my own testimony of faith in the Most Holy Eucharist. Ave verum corpus natum de Maria Virgine, vere passum, immolatum, in cruce pro homine! Here is the Church’s treasure, the heart of the world, the pledge of the fulfilment for which each man and woman, even unconsciously, yearns. A great and transcendent mystery, indeed, and one that taxes our mind’s ability to pass beyond appearances. Here our senses fail us: visus, tactus, gustus in te fallitur, in the words of the hymn Adoro Te Devote; yet faith alone, rooted in the word of Christ handed down to us by the Apostles, is sufficient for us. Allow me, like Peter at the end of the Eucharistic discourse in John’s Gospel, to say once more to Christ, in the name of the whole Church and in the name of each of you: “Lord to whom shall we go? You have the words of eternal life” (Jn 6:68).

At the dawn of this third millennium, we, the children of the Church, are called to undertake with renewed enthusiasm the journey of Christian living. As I wrote in my Apostolic Letter Novo Millennio Ineunte, “it is not a matter of inventing a ‘new programme’. The programme already exists: it is the plan found in the Gospel and in the living Tradition; it is the same as ever. Ultimately, it has its centre in Christ himself, who is to be known, loved and imitated, so that in him we may live the life of the Trinity, and with him transform history until its fulfilment in the heavenly Jerusalem”.The implementation of this programme of a renewed impetus in Christian living passes through the Eucharist.

Every commitment to holiness, every activity aimed at carrying out the Church’s mission, every work of pastoral planning, must draw the strength it needs from the Eucharistic mystery and in turn be directed to that mystery as its culmination. In the Eucharist we have Jesus, we have his redemptive sacrifice, we have his resurrection, we have the gift of the Holy Spirit, we have adoration, obedience and love of the Father. Were we to disregard the Eucharist, how could we overcome our own deficiency?

The mystery of the Eucharist – sacrifice, presence, banquet – does not allow for reduction or exploitation; it must be experienced and lived in its integrity, both in its celebration and in the intimate converse with Jesus which takes place after receiving communion or in a prayerful moment of Eucharistic adoration apart from Mass. These are times when the Church is firmly built up and it becomes clear what she truly is: one, holy, catholic and apostolic; the people, temple and family of God; the body and bride of Christ, enlivened by the Holy Spirit; the universal sacrament of salvation and a hierarchically structured communion.