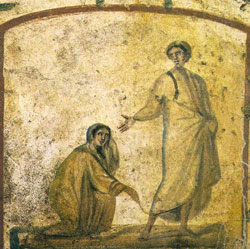 Though we know very little about these two martyrs under Diocletian, there is no question that the early church venerated them. Evidence of the respect in which they were held are the basilica Constantine built over their tombs and the presence of their names in the first eucharistic prayer.

Pope St. Damasus says that he heard the story of these two martyrs from their executioner who became a Christian after their deaths. Marcellinus, a priest, and Peter, an exorcist, died in the year 304. According to a legendary account of their martyrdom, the two Romans saw their imprisonment as just one more opportunity to evangelize and managed to convert their jailer and his family. The legend also says that they were beheaded in the forest so that other Christians wouldn't have a chance to bury and venerate their bodies. Two women found the bodies, however, and had them properly buried.