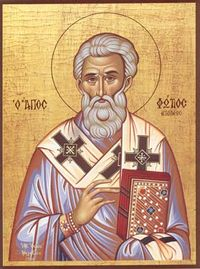 St. Landericus (or Landry) was a sincere and dedicated servant of God who, like his Lord Jesus Christ, had great love for the poor and the lowly. As Bishop of Paris, from 650-661, he labored zealously to improve their lot. And when the proceeds from the sale of all his possessions did not suffice to relieve their hungry during a famine, he went so far as to sell some of the Church vessels and furniture. St. Landericus became increasingly aware that the sick poor of his diocese were not really cared for by the custom then in vogue of housing them in little hostels dependent on the casual alms of charitable persons. This led him to erect the city's first real hospital, dedicated to St. Christopher, which in time became the famous Hotel-Dieu. Always on the alert to provide spiritual help for his people, this saintly bishop welcomed the Benedictines into his diocese and encouraged them to set up the Abbey of Denis. In 653, in company with twenty-three other bishops, he signed the foundation charter granted by King Clovis to the Abbey. He died about 661 after having commissioned the monk Marculfus to compile a collection of Ecclesiastical Formulas. His feast day is June 10.