Pope thanks Benedict XVI for his continuing service

Marking the 70th anniversary from the ordination of the Pope Emeritus, Pope Francis upholds his continuing service and describes him as “the contemplative of the Vatican” who prays for the Church and the diocese of Rome.

Pope Francis on Tuesday said he is marking an anniversary “hat touches the hearts of us all: 70 years ago, Pope Benedict was ordained a priest!”

Addressing the pilgrims gathered in St. Peter’s Square for the Angelus prayer on the Solemnity of Saints Peter and Paul, the patron saints of the city of Rome, the Pope said: that “To you, Benedict, dear father and brother, goes our affection, our gratitude and our closeness. “

He told those present that the Pope Emeritus lives in a monastery, “a place intended to house the contemplative communities here in the Vatican, so that they could pray for the Church.”

He is now the contemplative of the Vatican, the Pope continued, who spends his life praying for the Church and for the diocese of Rome, of which he is bishop emeritu: “Thank you, Benedict, dear father and brother. Thank you for your credible witness. Thank you for your gaze, constantly directed towards the horizon of God: thank you!"

Day of Prayer and Reflection for Lebanon

Pope Francis also recalled that the day after tomorrow, 1 July, a special day of prayer and reflection for Lebanon will take place in the Vatican. 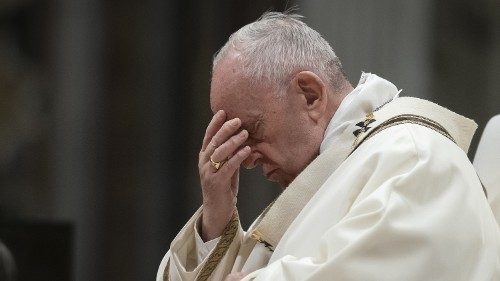 Pope, religious leaders to pray for Lebanon on July 1

“Together with the Heads of all the Churches present in the Land of the Cedars, we will let ourselves be inspired by the Word of the Scripture that says: The Lord has plans for peace.”

He reiterated his invitation to all to join spiritually in prayer so “that Lebanon may recover from the serious crisis it is going through and show the world once again its face of peace and hope.”

In his post Angelus remarks, the Pope also mentioned that Thursday, 1 July, will mark the 160th anniversary of the first edition of L'Osservatore Romano, the Vatican’s daily newspaper.

“I call it the ‘party newspaper’, he said sending its staff his best wishes and thanks for their service. “Continue your work with fidelity and creativity,” he said.

Posted by Deacon Mike Talbot at 10:49 AM