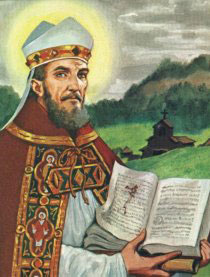 Bishop and missionary. A native of Wessex, England, he was the brother of Sts. Winebald and Walburga and was related through his mother to the great St. Boniface. After studying in a monastery in Waitham, in Hampshire, he went on a pilgrimage to Rome (c. 722) with his father, who died on the way at Lucca, Italy. Willibald continued on to Rome and then to Jerusalem. Captured by Saracens who thought him a spy, he was eventually released and continued on to all of the holy places and then to Constantinople (modern Istanbul, Turkey), where he visited numerous lauras, monasteries, and hermitages. Upon his return to Italy, he went to Monte Cassino where he stayed for ten years, serving as sacrist, dean, and porter. While on a visit to Rome, he met Pope St. Gregory III (r. 731-741), who sent him to Germany to assist his cousin St. Boniface in his important missionary endeavors. Boniface ordained him in 741 and soon appointed him bishop of Eichstatt, in Franconia. the Site of Willibald's most successful efforts as a missionary. With his brother Winebald, he founded a double monastery at Heidenheim, naming Winebald abbot and his sister Walburga abbess. Willibald served as bishop for some four decades. His Vita is included in the Hodoeporicon (the earliest known English travel book). An account of his journeys in the Holy Land was written by a relative of Willibald and a nun of Heidenheim.