June is the month devoted to the Sacred Heart of Jesus

Month of the Sacred Heart 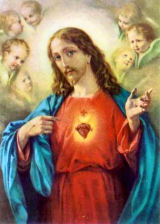 Behold this Heart which has loved men so much, and yet men do not want to love Me in return. Through you My divine Heart wishes to spread its love everywhere on earth."- Jesus to Saint Margaret Mary
Highlights

An Act of Consecration to the Sacred Heart of Jesus
Most sweet Jesus, humbly kneeling at Thy feet, we renew the consecration of our family to Thy Divine Heart. Be Thou our King forever! In Thee we have full and entire confidence. May Thy spirit penetrate our thoughts, our desires, our words and our deeds. Bless our undertakings, share in our joys, in our trials, and in our labors. Grant us to know Thee better, to love Thee more, to serve Thee without faltering.
Devotions to the Sacred Heart of Jesus

Litany of the Sacred Heart of Jesus

Act of Reparation to the Sacred Heart of Jesus

Enthronement of the Sacred Heart

The Sacred Heart And The Eucharist — John A. Hardon, S.J.

Doctrinal Foundation of Devotion to the Sacred Heart — John A. Hardon, S.J.

Litany of the Twelve Promises of the Sacred Heart

The Revelation of the Sacred Heart of Jesus Paral-le-Monial, France — George Pollard 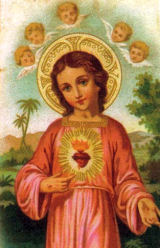 Sacred Heart of Jesus, Font of Love and Mercy.

Understood in the light of the Scriptures, the term "Sacred Heart of Jesus" denotes the entire mystery of Christ, the totality of his being, and his person considered in its most intimate essential: Son of God, uncreated wisdom; infinite charity, principal of the salvation and sanctification of mankind. The "Sacred Heart" is Christ, the Word Incarnate, Saviour, intrinsically containing, in the Spirit, an infinite divine-human love for the Father and for his brothers.

Excerpted from the Directory on Popular Piety and the Liturgy

The Popes on Devotion to the Sacred Heart 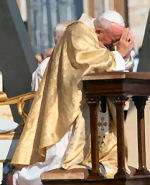 The feast of the Sacred Heart was approved for specified dioceses by Clement XIII in 1765, and extended to the whole Church by Pius IX in 1856. In 1889 Pope Leo XIII elevated it to the rank of first class, and through an encyclical letter in 1899 dedicated the whole Catholic world to the Sacred Heart of Jesus.

Devotion to the Sacred Heart was also an essential component of Pope John Paul II's hopes for the "new evangelization" called for by the Church.

"For evangelization today," he said, "the Heart of Christ must be recognized as the heart of the Church: It is He who calls us to conversion, to reconciliation. It is He who leads pure hearts and those hungering for justice along the way of the Beatitudes. It is He who achieves the warm communion of the members of the one Body. It is He who enables us to adhere to the Good News and to accept the promise of eternal life. It is He who sends us out on mission. The heart-to-heart with Jesus broadens the human heart on a global scale."

Scriptural Basis for the Devotion 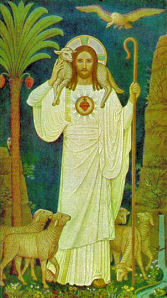 Jesus, who is one with the Father (cf. John 10, 30), invites his disciples to live in close communion with him, to model their lives on him and on his teaching. He, in turn, reveals himself as "meek and humble of heart" (Mt 11, 29). It can be said that, in a certain sense, devotion to the Sacred Heart of Jesus is a cultic form of the prophetic and evangelic gaze of all Christians on him who was pierced (cf. John 19, 37; Zac 12, 10), the gaze of all Christians on the side of Christ, transfixed by a lance, and from which flowed blood and water (cf. John 19, 34), symbols of the "wondrous sacrament of the Church"(St. Augustine).

The Gospel of St. John recounts the showing of the Lord's hands and his side to the disciples (cf. John 20,20), and of his invitation to Thomas to put his hand into his side (cf. John 20, 27). This event has also had a notable influence on the origin and development of the Church's devotion to the Sacred Heart.

These and other texts present Christ as the paschal Lamb, victorious and slain (cf. Apoc 5,6). They were objects of much reflection by the Fathers who unveiled their doctrinal richness. They invited the faithful to penetrate the mysteries of Christ by contemplating the wound opened in his side. Augustine writes: "Access is possible: Christ is the door. It was opened for you when his side was opened by the lance. Remember what flowed out from his side: thus, choose where you want to enter Christ. From the side of Christ as he hung dying upon the Cross there flowed out blood and water, when it was pierced by a lance. Your purification is in that water, your redemption is in that blood".

Excerpted from the Directory on Popular Piety and the Liturgy

The Sacred Heart and Our Spiritual Life 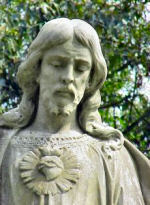 Devotion to the Sacred Heart is a wonderful historical expression of the Church's piety for Christ, her Spouse and Lord: it calls for a fundamental attitude of conversion and reparation, of love and gratitude, apostolic commitment and dedication to Christ and his saving work.

Devotions to the Sacred Heart of Jesus are numerous. Some have been explicitly approved and frequently recommended by the Apostolic See. Among these, mention should be made of the following:

Family Consecration
Family consecration to the Sacred Heart, in which the family, by virtue of the Sacrament of Holy Matrimony already participating in the mystery of the unity and love of Christ for the Church, is dedicated to Christ so that he might reign in the hearts of all its members (Aliae concessiones).

Act of Reparation to the Sacred Heart
The act of reparation, a prayer with which the faithful, mindful of the infinite goodness of Christ, implore mercy for the offences committed in so many ways against his Sacred Heart (Aliae concessiones).

The Practice of the First Fridays
The pious practice of the first Fridays of the month which derives from the "great promises" made by Jesus to St. Margaret Mary. At a time when sacramental communion was very rare among the faithful, the first Friday devotion contributed significantly to a renewed use of the Sacraments of Penance and of the Holy Eucharist. In our own times, the devotion to the first Fridays, even if practised correctly, may not always lead to the desired spiritual fruits. Hence, the faithful require constant instruction so that any reduction of the practice to mere credulity is avoided and an active faith encouraged so that the faithful may undertake their commitment to the Gospel correctly in their lives. They should also be reminded of the absolute preeminence of Sunday, the "primordial feast" (Sacrosanctum Concilium), which should be marked by the full participation of the faithful at the celebration of the Holy Mass.

Excepted from the Directory on Popular Piety and the Liturgy

Posted by Deacon Mike Talbot at 9:11 AM