Apostle of Germany is Saint for Saturday 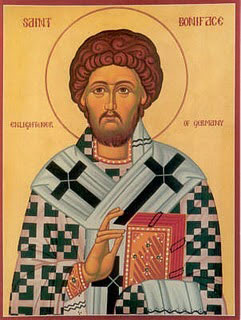 Winfrith had expected to return to England from Friesland (in what is now Holland) in triumph. He had left the land where he was a respected scholar, teacher, and priest because he was convinced he was called to missionary work. He had argued and pestered his abbot into letting him go because he would gain greater success for God in foreign lands. He had abandoned a successful, safe life in his mid-forties to win souls for God.

But from the moment he stepped off the ship, his trip to Friesland to join the famous missionary Willibrord had been a disaster. Winfrith and his companions had landed to discover that the ruler of Friesland, Radbod, had declared war on Christians, destroying churches and monasteries, driving Willibrord into exile, and sending what was left of the Church into hiding. Winfrith tried in vain to convince Radbod to let him and his companions preach. Finally, he had no choice but to return to England a few short months later in defeat.

It would have been easy to give up missionary work at this point. Almost anyone would have looked at this fiasco and said that God was trying to tell him that he was called to stay and serve in England. Winfrith agreed that God had given him a message and he agreed that he had been mistaken. But his mistake had not been in the call but how he followed it. He had believed all he needed to ensure the mission's success was an enthusiastic response to God's call.

It's surprising that Winfrith ever would have believed this since so much of his previous life had depended on training and organization. Born about 675, he had convinced his parents to send him to a monastery for schooling because he admired the monks who had visited his home. Through diligent study he rapidly learned all that this local monastery could teach him and was transfered to the monastery at Nursling for further schooling. There he became such a well-known teacher that students circulated notes from his classes.

Back in England he started planning for his second missionary journey. He kept his enthusiasm but directed his zeal into organization and preparation for the journey. He would go to the pagan lands ... but first he would travel to Rome. When he had traveled to Friesland he had had no authority to back him up. No one had sent him there, no one would stand up for him if he needed support or help. Now he went to the pope asking for an official mission and the backing of the Church. Pope Gregory II was intrigued but uncertain and talked to Winfrith all winter long before finally sending him on a test mission to Thuringia in Germany.

In the pope's commission on May 15, 1719, we have the first record of Winfrith's new name, Boniface. The pope apparently gave him this new name because the previous day had been the feast of a martyr by that name. From then on he was known as Boniface to all who knew him.

Missionaries had come to Thuringia before but the Church there was in bad shape, isolated and subject to superstition and heresy. Boniface saw that he was going to get no help from the local clergy and monks, but he had learned in Friesland he could not spread God's word alone. He was about to send for help when he heard that Radbod had died and the missionary Willibrord was back in Friesland. Boniface immediately took off for Friesland, the site of his former humiliation. Perhaps he returned in hopes of redeeming his earlier disaster. It seems more likely, however, that he was following through on the lesson he had learned at that time and was going to get training from the expert in missions: Willibrord.

In the three years he spent with Willibrord, Boniface gave as much as he gained. So helpful was he that Willibrord, who was in his sixties, wanted to make Boniface his successor. But with his training over, Boniface felt the pull of the German missionary work he'd left behind, and, despite Willibrord's pleas, went to Hesse.

Unlike Thuringia or Friesland, Hesse had never been evangelized. Boniface had to start from scratch. Needing even more authority in dealing with chieftains who were his first goal for converts, he appealed to the pope again. During a trip to Rome, the pope consecrated Boniface bishop.

Boniface returned to find that his problems had worsened. People were attracted by Christianity but unable to give up their old religion and superstitions, perhaps out of fear of being different or of how their old "gods" would react. Knowing that the people needed a reason to let go, Boniface called the tribes to a display of power. As the people watched, Boniface approached the giant oak of Geismar, a sacred tree dedicated to Thor, with an axe. Some of the people must have trembled with each stroke of his axe, but nothing happened. Finally with a crack, the tree split in four parts that we, are told, fell to the ground in the shape of a cross. There stood Boniface, axe in hand, unharmed by their old gods, strong in the power of the one God.

After his success in Hesse, he returned to Thuringia to confront the old problem of the decadent remnants of the Church there. Unable to get help from the suspect clergy in Thuringia, he called to England for help. Nuns and monks responded to his call enthusiastically for many years. We still have many of Boniface's letters, including correspondence with his helpers in England. Reforming the Church was the biggest challenge in Thuringia and he had many thorny questions to answer. When a rite of baptism had been defective was it valid? What should he do about immoral clergy? Still remembering his first lesson, he appealed to Rome for answers from the pope. All his appeals to Rome helped him -- but it also helped forge a much stronger bond between Rome and Europe.

Boniface was called upon to lend his own support to Frankish Church which was also sadly in need of reform. He set up councils and syonds and instituted reforms which revitalized the Church there.

Few saints retire, and Boniface was no exception. At 73, a time when most are thinking of rest and relaxation, Boniface headed back to Friesland on a new mission. One day in 754 while he was awaiting some confirmands, an enemy band attacked his camp. Although his companions wanted to fight, Boniface told them to trust in God and to welcome death for the faith. All of them were martyred.

Boniface is known as the Apostle of Germany. He not only brought the Christian faith but Roman Christian civilization to this portion of Europe.