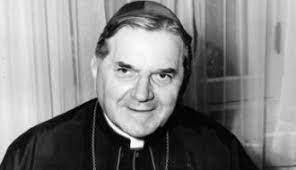 Hero of the week: Archbishop Joseph Rummel 1876-1964
A student once said to me, “The most difficult time about being a father must be when you have to punish your kids for the same things you did as a kid!" He was right! All of us have a "past" and all of us from the Pope on down are "wounded people.” However, that should not keep us from being bold enough to challenge evil when we see it in others.
Archbishop Joseph Rummel, a sinner like the rest of us, had the courage to challenge the racial segregation of Catholic schools in New Orleans. He stated: "Enforced racial discrimination inflicts incalculable mental and emotional cruelty...these discriminations are unjustifiable violations of a Christian way of life and the principles of our American heritage." He put in motion the desegregation of Catholic schools even before the epic court decision of Brown v. Board of Education in 1954.
Rummel wrote: "Let there be no further discrimination or segregation in the pews, at the communion rail, in the confessional, and in parish meetings just as there will be no segregation in the Kingdom of Heaven." Unfortunately, he was met with outrage, especially by three vocal white Catholics. They even appealed to Rome, but Pope Pius XII reminded them that racism was an evil. When they sought to bring the laws of the state into play, Rummel threatened them with excommunication! They persisted and he barred them from the Eucharist, the sacraments and a Christian burial for "provoking the people of the Archdiocese to disobedience in the matter of opening our schools to all children."
When a Bishop forbids a Catholic from receiving Communion, it is not done out of vengeance and excessive authority, any more than when a father "grounds" his son when he finds out he was drinking and driving. The son has betrayed the values of his parents and put himself in mortal danger. Rummel realized the three were portraying a false image of what it means to be a Catholic and misleading others, and the three were putting their souls in mortal danger by their behavior.
A father wins no popularity with a son for grounding him, but he knows that in his role he must often suffer a temporary resentment for a future good. Rummel endured much criticism for calling to task Catholics who flaunted the teaching of the Church in such an official and public manner. He joins the ranks of such brave bishops as Saint Ambrose. Saint John Fisher, and Bishop Von Galen who dared to call Catholics to task for their public crimes. The three who opposed Rummel’s position on segregation eventually repented and came home to the faith.
Let us pray that today we will have leaders with the courage of Archbishop Rummel; otherwise it will appear to the world that our leaders do not care what Catholics believe or practice. If our leaders are silent, it will appear that there are no consequences for one who claims to be Catholic, yet endorses the violation of not only human rights, but human lives!
Posted by Deacon Mike Talbot at 6:36 PM