A patron Saint for prison chaplains and inmates 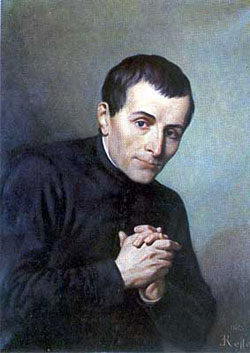 Joseph Cafasso was born at Castelnuovo d'Asti in the Piedmont, Italy, of peasant parents. He studied at the seminary at Turin, and was ordained in 1833. He continued his theological studies at the seminary and university at Turin and then at the Institute of St. Franics, and despite a deformed spine, became a brilliant lecturer in moral theology there. He was a popular teacher, actively opposed Jansenism, and fought state intrusion into Church affairs. He succeeded Luigi Guala as rector of the Institute in 1848 and made a deep impression on his young priest students with his holiness and insistence on discipline and high standards. He was a sought-after confessor and spiritual adviser, and ministered to prisoners, working to improve their terrible conditions. He met Don Bosco in 1827 and the two became close friends. It was through Joseph's encouragement that Bosco decided his vocation was working with boys. Joseph was his adviser, worked closely with him in his foundations, and convinced others to fund and found religious institutes and charitable organizations. Joseph died on June 23 at Turin and was canonized in 1947. His feast day is June 23rd.