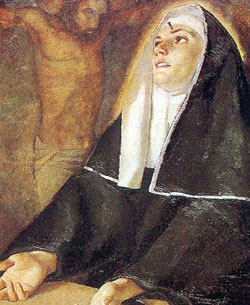 Augustiniannun, also called Margarita. She was born in Roccaporena, near Spoleto, Italy, in 1381, and expressed from an early age the desire to become a nun. Her elderly parents insisted that she be married at the age of twelve to a man described in accounts of her life as cruel and harsh. She spent eighteen extremely unhappy years, had two sons, and was finally widowed when her husband was killed in a brawl. Both sons also died, and Rita, still anxious to become a nun, tried unsuccessfully to enter the Augustinians in their convent at Cascia. She was refused because she was a widow and because of the requirement that all sisters should be virgins. Finally, in 1413, the order gave her entry, and she earned fame for her austerity, devotion to prayer, and charity.

In the midst of chronic illnesses, she received visions and wounds on her forehead which resembled the crown of thorns. She died on May 22 at Cascia, and many miracles were reported instantly. Canonized in 1900, she is honored in Spain as La Santa de los Impossibles and elsewhere as a patron saint of hopeless causes.