Saint for the first Friday of May 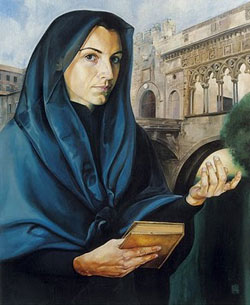 Blessed Rose was born at Viterbo in 1656, the daughter of Godfrey Venerini, a physician. Upon the death of a young man who had been paying court to her, she entered a convent, but after a few months had to return home to look after her widowed mother. Rose use to gather the women and girls of the neighborhood to say the rosary together in the evenings, and when she found how ignorant many of them were of their religion, she began to instruct them. She was directed by Father Ignatius Martinelli, a Jesuit, who convinced her that her vocation was as a teacher "in the world" rather than as a contemplative in a convent; whereupon in 1685, with two helpers, Rose opened a preschool for girls in Viterbo: it soon became a success. Blessed Rose had the gift of ready and persuasive speech, and a real ability to teach and to teach others to teach, and was not daunted by any difficulty when the service of God was in question. Her reputation spread, and in 1692, she was invited by Cardinal Barbarigo to advise and help in the training of teachers and organizing of schools in his diocese of Montefiascone. Here she was the mentor and friend of Lucy Filippini, who became foundress of an institute of maestre pie and was canonized in 1930. Rose organized a number of schools in various places, sometimes in the face of opposition that resorted to force in unbelievable fashion - the teachers were shot at with bows and their house fired. Her patience and trust overcame all obstacles, and in 1713 she made a foundation in Rome that received the praise of Pope Clement XI himself. It was in Rome that she died, on May 7, 1728; her reputation of holiness was confirmed by miracles and in 1952, she was beatified. It was not until sometime after her death that Blessed Rose's lay school teachers were organized as a religious congregation: they are found in America as well as in Italy, for the Venerini Sisters have worked among Italian immigrants since early in the twentieth century. Her feast day is May 7.