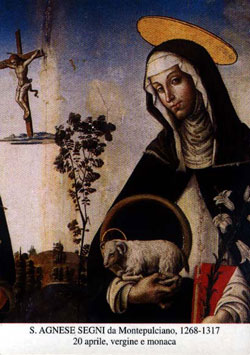 Nun and foundress in Tuscany. She was born circa 1268 and at the age of nine entered the monastery of Montepulciano, near her home in Gracchiano-Vecchio. Four years later she was commissioned by Pope Nicholas IV to assist in the foundation of a new convent in Procena. At fifteen she became the head of the nuns there. About 1300, the people of Montepulciano built a new convent in order to lure Agnes back to them. She established a convent under the Dominican rule and governed there until her death in 1317. Agnes was noted for her visions. She held the infant Christ in her arms and received Holy Communion from an angel. She experienced levitations and she performed miracles for the faithful of the region. She is still revered in Tuscany.