Today is a Marian Feast Day: Our Lady of Good Counsel

Monday of the Fourth Week of Easter; Optional Memorial of Our Lady of Good Counsel 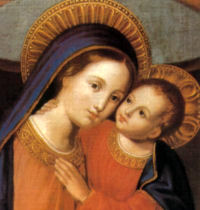 O God, perfect light of the blessed, by whose gift we celebrate the paschal mysteries on earth, bring us, we pray, to rejoice in the full measure of your grace for ages unending. Through our Lord Jesus Christ, your Son, who lives and reigns with you in the unity of the Holy Spirit, God, for ever and ever.

The devotion to our Lady of Good Counsel originated at Gennazzano, a village in the neighborhood of Rome, where an Augustinian church, in which is enshrined a miraculous picture of our Lady, had been for centuries a place of popular pilgrimage. This feast is observed in Canada.

According to the 1962 Missal of Bl. John XXIII the Extraordinary Form of the Roman Rite, today is the feast of Sts. Cletus and Marcellinus. St. Cletus, who is probably identical with St. Anacletus (his feast moved from July 13 before 1961), figures in the list of Popes as the second successor of St. Peter, A.D. 76-88. St. Marcellinus governed the Church two centuries later, from A.D. 296 to 304, during the terrible Diocletian persecution.

The Church in Spain celebrates the feast of St. Rafael Arnáiz, who was born in Burgos, Spain on twentieth century.v

Our Lady of Good Counsel 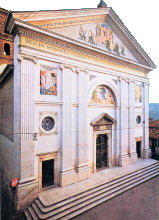 On the Feast of Saint Mark, April 25 1467, the people of Genazzano, Italy witnessed a marvellous sight. A cloud descended upon an ancient church dedicated to Our Lady of Good Counsel. When the cloud disappeared, an image of Our Lady and the Child Jesus was revealed which had not been there before. The image, on a paper-thin sheet, was suspended miraculously.

Soon after the image's appearance many miracles were attributed to the intercession of Our Lady of Good Counsel. Because of this, Pope Paul II ordered an investigation and the results have been preserved.

It was later discovered that the very same image had been seen in a church dedicated to the Annunciation in Scutari, Albania. The image in this church was said to have arrived there in a miraculous manner. Now, the image had been transported from Albania miraculously to avoid sacrilege from Moslem invasion.

A commission of enquiry determined that a portrait from the church was indeed missing. An empty space the same size as the portrait was displayed for all to see.

Many miracles continue to be attributed to Our Lady of Good Counsel. Pope Saint Pius V, for example, credited victory in the Battle of Lepanto to Her intercession.

Several Popes have approved the miraculous image. In 1682 Pope Innocent XI had the portrait crowned with gold. On July 2 1753 Pope Benedict XIV approved the Scapular of Our Lady of Good Counsel, and was the first to wear it.

In 1884 a special Mass and Office of the Feast of Our Lady of Good Counsel was approved by Pope Leo XIII.

For more than 500 years the image has continued to attract countless pilgrims.

Although much of the church was destroyed during World War II, the image has remained intact — and continues to be suspended miraculously.

Labels: Feasts of the Church