The Papal Almoner announces plans to celebrate Pope Francis’ name-day on Friday by providing some 600 of Rome’s poor and homeless people with their second dose of the Covid-19 vaccine.

The Office of the Papal Almoner released a statement on Thursday connecting the feast of St. George—Jorge Mario Bergoglio’s name-day—with an initiative offering coronavirus vaccines to the poor and homeless of Rome.

“On Friday, 23 April, the liturgical memorial of St. George the Martyr, Pope Francis’ name-day, the poor will again be at the center of the Holy Father’s attention,” read the statement.

Around 600 people will return to the Vatican’s Paul VI Hall for their second dose of the Pfizer-BioNTech coronavirus vaccine.

Those receiving the jab on Friday are among the 1,400 “beneficiaries of the vaccine drive begun during Holy Week by the Apostolic Almoner in collaboration with other associations.”

The statement added that those present will also take part in a celebration to mark the Holy Father’s name-day “with a surprise offered by the Pope.”

Cardinal Konrad Krajewski, the Papal Almoner, said the Pope had decided to “offer something, rather than receive, in a pure evangelical style.”

In 2020, the Pope sent respirators to Romania, which was particularly afflicted by the pandemic at the time. 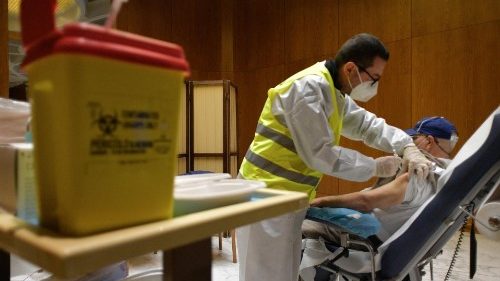 With the most vulnerable

The Vatican’s campaign to offer vaccines to the poor and homeless of Rome began in January.

The first to receive the jab were women and men over the age of 60 with serious health problems, who had difficulty accessing Italy’s healthcare system.

The group currently receiving their second dose, which comprised around 1,400 people, are among the most vulnerable, including several guests of a home run by the Missionaries of Charity, people receiving aid from the St. Egidio Community, and others helped by a group called “Medicina Solidale”.

Posted by Deacon Mike Talbot at 10:21 AM