Saint of the day for Wednesday 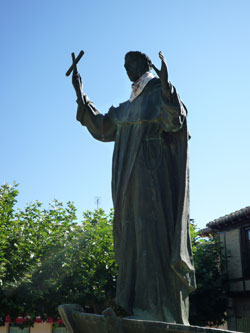 Dominican protector of captives and sailors. Born in Astorga, Spain, he entered the Dominicans and became the chaplain and confessor of King St. Ferdinand of Castile. He preached a campaign against the Moors, and then cared for the captured Muslims. He also cared for sailors, who dubbed him Thelmo, after St. Elmo.