Saint of Day for Saturday 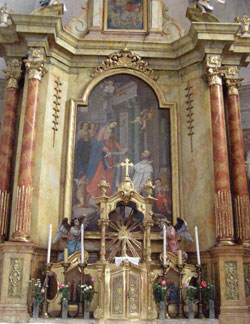 Stephen Harding was born in Dorset, England. He was a speaker of English, Norman French, and Latin. He was placed in the abbey of Sherbourne at a young age, but eventually put aside the cowl and became a travelling scholar. He eventually moved to the abbey of Molesme in Burgundy, under the abbot Saint Robert of Molesme (c. 1027 - 1111).

When Robert left Molesme to avoid its corruption and laxity, Stephen and Saint Alberic went with him. Unlike Alberic, Stephen was not ordered to return, and he remained in solitude with Robert. When twenty-one monks deserted Molesme to join Robert, Harding, and Alberic, the three leaders formed a new monastery at Citeaux.

Robert was initially abbot at Citeaux, returning to Molesme after a year. Alberic then took over, serving as abbot until his death in 1108. Stephen Harding, the youngest of the three men, became the third abbot of Citeaux. As abbot, Stephen Harding guided the new monastery over a period of great growth. Bernard of Clairvaux came to visit in 1112 and brought with him his followers. Between 1112 and 1119, a dozen new Cistercian houses were founded to contain the monks coming to the new movement. In 1119, Stephen wrote the Carta Caritatis, ('Charter of Love') an important document for the Cistercian Order, establishing its unifying principles.

Stephen served the house at Citeaux for twenty-five years. While no single person is considered the founder of the Cistercian Order, the shape of Cistercian belief and its rapid growth in the 12th century was due to the leadership of Stephen Harding. In 1133, he resigned the head of the order, due to age and disability. He died the following year.

His feast day in the Roman Catholic calendar of saints is March 28. The north aisle of St Sepulchre-without-Newgate church in London, U.K. was formerly a chapel dedicated to him (it became the Musicians' Chapel in the 20th century).

In Hungary, in the village Apátistvánfalva there is a Catholic Baroque Church estd. by 1785, the patron saint of which is Stephen Harding. The village, and the vicinity Vendvidékwas at one time under Cistercian lordship.