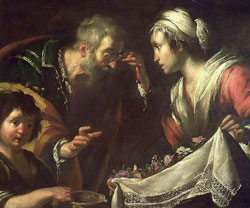 Zita (1218-1272) + Servant and miracle worker. Born at Monte Sagrati, Italy, she entered into the service of the Fratinelli family, wool dealers in Lucca, at the age of twelve. Immediately disliked by the other servants for her hard work and obvious goodness, she earned their special enmity because of her habit of giving away food and clothing to the poor including those of her employers. In time, she won over the members of the household. According to one tradition, the other servants were convinced when one day they found an angel taking Zita's place in baking and cleaning. Throughout her life she labored on behalf of the poor and suffering as well as criminals languishing in prisons. She was also credited with a variety of miracles. Canonized in 1696, she is the patroness of servants and is depicted in art with a bag and keys, or loaves of bread and a rosary. Feast day: April 27.