On the feast of Divine Mercy on Sunday, Pope Francis urges Christians to open themselves to Christ’s mercy, which He grants through peace, forgiveness, and His wounds. In turn, they are asked to share this mercy with others.

“Let us be renewed by the peace, forgiveness, and wounds of the merciful Jesus. Let us ask for the grace to become witnesses of mercy. Only in this way will our faith be alive and our lives unified. Only in this way will we proclaim the Gospel of God, which is the Gospel of mercy.” This is the exhortation that Pope Francis offered in his homily at Mass on Divine Mercy Sunday, which is celebrated on the second Sunday of Easter.

“For if love is only about us, faith becomes arid, barren and sentimental. Without others, faith becomes disembodied. Without works of mercy, it dies,” the Pope said. He celebrated the Mass at the 16th century Church of Santo Spirito in Sassia, close to the Vatican, which St. Pope John Paul II in 1994 designated as the official Divine Mercy church in Rome.

In keeping with Covid-19 health protocols, only some 80 people were permitted within the Church for the Mass. They included male and female prison inmates, nurses, disabled persons, refugees, a migrant family, and some ‘Missionaries of Mercy’ priests concelebrating with the Pope at the altar. However, the Mass was telecast and streamed live on social media to allow wider participation.

Pope Francis began his homily by recalling how the risen Jesus brings about “the resurrection of the disciples” by raising their spirits and changing their lives. He does this with mercy. “Having received that mercy, they become merciful in turn,” the Pope said. They receive mercy from Him through three gifts: peace, the Spirit, and His wounds.

After the death of Jesus, the Pope explained, the disciples were huddled in a room, trapped in futility and full of remorse for having abandoned and denied their Lord. But Jesus arrives and greets them with, “Peace be with you!” The Pope said Jesus “does not bring a peace that removes the problems without, but one that infuses trust within. It is no outward peace, but peace of heart.” He explained, “The peace of Jesus made them pass from remorse to mission.” The peace of Jesus that awakens mission, the Pope continued, “entails not ease and comfort, but the challenge to break out of ourselves,” from the self-absorption that paralyzes, and from the bonds that keep the heart imprisoned. The disciples realized that God did not condemn or demean them, but instead believed in them; as St. John Henry Newman put it, “He loves us better than we love ourselves.” 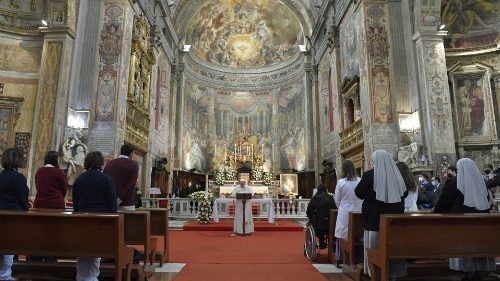 Pope Francis: 'Pass on the fire of Jesus’ merciful love'

The second way Jesus shows mercy, the Pope said, is by bestowing the Holy Spirit for the forgiveness of sins. By ourselves, he said, we cannot remove sin and its guilt. “Only God takes it away, only He by His mercy can make us emerge from the depths of our misery.” Hence, “we need to let ourselves be forgiven.”

“Forgiveness in the Holy Spirit is the Easter gift that enables our interior resurrection,” the Pope said, urging Christians to ask for the grace to “embrace the Sacrament of forgiveness.” “Confession,” he said, “is not about ourselves and our sins, but about God and His mercy.” “Confession is the Sacrament of resurrection, pure mercy,” the Pope said, urging all those who hear confessions to convey the sweetness of mercy.

Lastly, Jesus heals us with mercy by making our wounds His own and by bearing our weaknesses in His own body, Pope Francis said. The wounds of Jesus are “open channels between Him and us, shedding mercy upon our misery.” “They are pathways that God has opened up for us to enter into His tender love and actually ‘touch’ who He is.” “This,” the Pope said, happens at every Mass, where Jesus offers us His wounded and risen Body.” As the day’s Gospel episode of the doubting Thomas points out, “we discover God; we realize how close He is to us and we are moved to exclaim, ‘My Lord and my God!’” The grace of receiving mercy, he said, is the starting-point of our Christian journey. "Only if we accept the love of God, will we be able to offer something new to the world."

And this is what the disciples did, the Pope said pointing to the Acts of the Apostles. “Receiving mercy, they, in turn, became merciful.” No one claimed private ownership of any possessions, but everything they owned was held in common, which the Pope stressed is pure Christianity, not Communism. Their fears had been dispelled by touching the Lord’s wounds, and now they are unafraid to heal the wounds of those in need.

The Pope concluded, urging all not to remain indifferent. “Having received mercy, let us now become merciful,” he said.

The feast of Divine Mercy has come into the liturgical calendar recently. A Polish nun, Saint Faustina Kowalska, who died in 1938, was an apostle of the devotion to Divine Mercy. During the course of revelations to her, Jesus asked on numerous occasions that a feast day be dedicated to Divine Mercy, and that this feast be celebrated on the Sunday after Easter.

The liturgical texts of the Second Sunday of Easter already concern the institution of the Sacrament of Penance, the Tribunal of the Divine Mercy, and thus are already suited the request of Jesus.  This feast, which had previously been granted to the nation of Poland and been celebrated within Vatican City, was extended to the Universal Church by Pope John Paul II on the occasion of the canonization of St Faustina on 30 April 2000. Later, in a decree dated 23 May 2000, the Vatican Congregation for Divine Worship and the Discipline of the Sacraments stated that "throughout the world, the Second Sunday of Easter will receive the name Divine Mercy Sunday.”

Posted by Deacon Mike Talbot at 9:00 AM