One of three powerhouse Saints for Wednesday 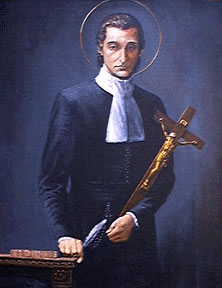 Louis Mary Grignion was born to a poor family on January 31, 1673 at Montfort, France. He was educated at the Jesuit college in Rennes and was ordained there in 1700. He was assigned as chaplain to a hospital at Poitiers, and his much needed reorganization of the hospital staff caused great resentment, leading to his resignation. However, during his stay there he organized a group of women into the Congregation of the Daughters of Divine Wisdom.

Eventually Louis went to Rome where Pope Clement XI appointed him missionary apostolic, and he began to preach in Brittany. His emotional style caused much reaction, but he was successful, especially in furthering devotion to the Most Blessed Virgin through the Rosary. He also wrote a very popular book, True Devotion to the Blessed Virgin. In 1715, Louis organized several priests and formed the Missionaries of the Company of Mary. He died in 1716 at Saint-Laurent-sur-Sever, France, and was canonized in 1947 by Pope Pius XII.

St. Louis de Montfort was a very able preacher, yet his emotional style along with his appeal to the poor caused much opposition. Undaunted by his critics, he continued his preaching. In addition, he expended great effort in spreading devotion to the Most Blessed Virgin, both through preaching and by the written word. Eventually he founded the clerical institute known more popularly today as the Montfort Fathers who carry on the work of preaching the Word and spreading devotion to Mary. Louis' perseverance in the face of opposition benefits the Church today in its faith struggle. His feast day is April 28.