Archbishop Chaput encourages to not be afraid of really living

Abp. Charles J. Chaput: “Don’t be afraid of dying. Be afraid of not really living.” 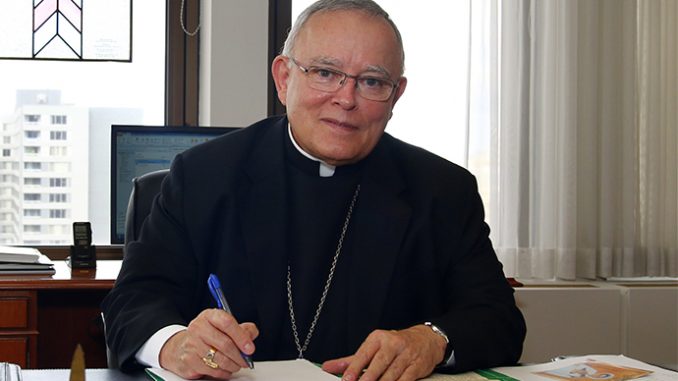 Now-retired Philadelphia Archbishop Charles J. Chaput is seen in this 2016 file photo. He is the author of the book "Things Worth Dying For: Thoughts on a Life Worth Living." (CNS photo/Sarah Webb, CatholicPhilly.com)

Archbishop Charles J. Chaput, O.F.M. Cap., has been a prominent voice in the Church for decades. A Capuchin priest, he served as bishop of the Diocese of Rapid City (South Dakota) from 1988-1997, at which time he was named Archbishop of Denver, a position he held until 2011. He served as Archbishop of Philadelphia from 2011 until his retirement in 2020. 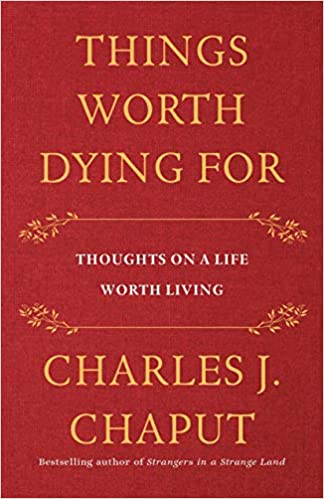 He grew up in rural Kansas, and is a member of the Prairie Band Potawatomie Nation—the first Native American archbishop and only the second Native American bishop in the United States. He has been a priest for over 50 years, and has held posts as a theology instructor, parish pastor, and provincial administration. Between these and his episcopal appointments, Chaput has experienced a wide swath of the life of the Church in the United States, which has given him a particular insight into many of the problems Christians confront in our society.

He is the author of several books, including Strangers in a Strange Land: Living the Catholic Faith in a Post-Christian World (Henry Holt and Co., 2017), Render Unto Caesar: Serving the Nation by Living Our Catholic Beliefs in Political Life (Image, 2009), and contributed to Priests: What Lies Ahead? (Ignatius Press, 2018), and many more.

His latest book is Things Worth Dying For: Thoughts on a Life Worth Living (Henry Holt and Co., 2021), in which he explores profound questions of faith, our yearning for God, modern individualism and idols, and how we can discern what’s really important.

Catholic World Report: What prompted you to write this book?

Archbishop Charles Chaput: It wasn’t my idea. Bill Barry suggested it. Bill has been my agent and a friend for 14 years. The more I thought about it, the more his encouragement made sense. We all die, but not all of us really live — “live” in the sense of committing ourselves to the things that finally matter. So how do we do it? I wanted to write about that.

CWR: Our culture typically does not put any value in death; as a result, the concept of there being things worth dying for is foreign to a lot of people. How can something be worth dying for, when we put such a premium on protecting and extending life (for many people, at all costs)?

Archbishop Chaput: That question only makes sense if we see our mortality, literally, as a “dead end.” A lot of us suffer from a subtle kind of despair. Fear of death is poisonous. It drives people to bury themselves in all sorts of evasions and distractions. And it’s understandable. Nobody wants to die, including me. But we will. There’s no way around it. Leon Kass, the great Jewish bioethicist, asks a better question in his writings: Why would we want to live another 50 or 100 years beyond a normal lifespan? What’s the purpose? Faith provides an answer that gives our limits meaning. Faith changes the entire dynamic of our time in the world. If we believe in a higher purpose to our lives, and discipline our choices and actions to the reality of an afterlife, that casts an entirely new light on our time here. It replaces fear with hope; and hope frees us to love.

CWR: “Your hearse won’t have a luggage rack.” This is a line you attribute to your father, and I think it does a great job of making its point: “you can’t take it with you,” as the saying goes. How could it help our culture if everyone really understood this?

Archbishop Chaput: Jesus said “You will know the truth, and the truth will make you free” (Jn 8:32). He embodied real freedom because he faced and overcame the fear of death, and in doing that he freed all of us for a new and eternal life. Compare that to the culture we now actually have. As Americans, we take pride in our nation as the land of the free and the home of the brave. But we’re too often neither. We’re cocooned in distractions and manufactured appetites that smother and enervate us. If more of us thought clearly — not morbidly, but clearly — about our end, it would give us the sobriety to change course and pursue the right things.

CWR: As Christians, as Catholics, do we have some special insight into what is really worth dying for that our non-Christian brethren don’t?

Archbishop Chaput: Every serious search for God has merit. But there’s no better explanation for the meaning of our lives than Christianity, and the reason is simple. It’s true.

CWR: Do you think the emergence of COVID-19 last year has aided in people’s ability, or willingness, to address questions of mortality and what’s really important in life?

Archbishop Chaput: For some that’s been true. But I think most people have focused on trying to avoid the virus, without much deep thought beyond that. Maybe I’m wrong. I hope I am.

CWR: How has retirement allowed you to look at this question in a new way?

Archbishop Chaput: Well, at least for me, the road ahead is a lot shorter than it used to be. That certainly gets one’s attention.

CWR: As a Capuchin, do you think the Franciscan (and specifically Capuchin) tradition can give us special insight into the things that are worth dying for?

Archbishop Chaput: Yes, very much so. The Capuchins were a reform movement within the broader Franciscan community. They were an effort to purify and get back to the original Franciscan charism. Francis loved the poor, loved creation, and loved God’s hand in the world. But there was nothing soft or indulgent about him. He demanded holiness in himself and his brothers. He was well acquainted with Sister Death, and he understood very clearly that to meet her with peace, a person needs to live for God and for others, rather than for oneself.

CWR: In your priestly and episcopal ministry, you’re known as a staunch and vocal defender of the truth and preacher of the Gospel. Is this because you appreciate that these are things worth dying for?

Archbishop Chaput: They’re certainly worth living for, because they’re true, and filled with freedom and joy. I think when you really try to live by the convictions you claim to believe, at whatever the cost, it does wonders for both your spirit and your spine.

CWR: Is there anything else you would like to add?

Archbishop Chaput: Don’t be afraid of dying. Be afraid of not really living — living in a way that leads us, and those we love, to an eternity of life with God. Death is not an end. It’s a beginning. It’s the doorway to a Father who loves us.