A great reflection on St. Dismas, the good thief, on this Good Friday

Jesus remember me, when you come into your Kingdom 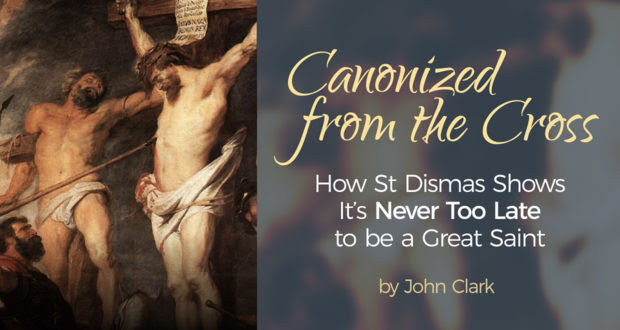 Canonized from the Cross: How St Dismas Shows it’s Never Too Late to be a Great Saint

It is often wondered why today is called “Good Friday.” It seems contradictory to call the events of Good Friday good. Perhaps some of the answer lies in the story of a man who hung on a cross beside Jesus. Ironically, he is often referred to with a seemingly contradictory title. He is called “The Good Thief.”
The Scriptural Good Friday account gives us a glimpse of the lives of two men. Thieves by profession—each apprehended, each tried, each sentenced. Until the last few moments of their lives, their stories couldn’t have been more similar. But in the last few moments of their lives, their stories couldn’t have been more different. And these were the moments that mattered.
As our Lord hung on the Cross, flanked by two thieves, He could look down and see and hear those who were gleeful about His Death. Driven mad by envy and a deicidal hatred that warps the minds of men, they were giddy about His demise. And not all who derided Him stood on the ground; one hung from another cross. The bad thief, as he is remembered, used his last ounce of energy to mock and blaspheme Jesus.
But not everyone at the Good Friday scene hated Jesus. Quite the contrary. Mary the Mother of God and Saint John knelt near Jesus, courageously expressing their love, worship, and affection toward Him. And we have every reason to believe that Mary and Saint John were, at that moment, praying for the conversion of another. He was the other thief, whom history remembers as Saint Dismas.
When Dismas heard the blasphemy of the bad thief, Dismas responded: “We, indeed, are justly condemned to death on the cross: but this man hath done no evil.” Saint Robert Bellarmine writes that with these words, Dismas was at once confessing his sins and proclaiming the innocent of Jesus. How sweet these words must have been to the Heart of Jesus! After hearing unjust condemnations by so many, Jesus hears the words: “This man hath done no evil.”
Dismas then continues speaking with words that will resonate until the end of time and resound throughout the vast chambers of eternity: “Lord, remember me when Thou shalt come into Thy kingdom.”
Bellarmine writes that Dismas’ profession of faith was a result of the Holy Spirit pouring His grace into the heart of the good thief; that Dismas’ words showed that he considered himself to be the redeemed servant of God. Even though he is aware that he has lived a terribly sinful life, Dismas is expressing a humble and total confidence in the mercy and love of God.
It’s hard to know what response Dismas was expecting from Jesus. Dismas’ words indicate that he expected mercy, but what form that mercy would take was unknown to him. Dismas was also aware of something else: Jesus was suffering terribly and was almost unable to speak.
Dr. Pierre Barbet, author of the book titled A Doctor at Calvary, researched in medical detail the sufferings of Jesus’ Passion. Barbet explains that, after Jesus was nailed to the cross, He experienced terrible muscle spasms and painful asphyxiation. Because of his positioning on the cross, Jesus had extreme difficulty breathing and experienced an agony that is almost indescribable. Barbet speculates that at some point, due to the difficulty of getting air into His lungs, Jesus may have been rendered almost unable to speak.
But there was one way he could gather enough air into His lungs to speak. In order to speak, Jesus had to push and drive His feet hard onto the nails on the cross to raise Himself, while simultaneously pulling Himself up by the nails in His hands. In other words, He needed to use the very instruments of His torture as an aid to speak words of mercy to the world. Barbet describes that each time Jesus spoke from the Cross, he had to undergo this harrowing process.
Why did Jesus do this?
Because Jesus had something to tell Dismas.
Jesus knew about every sin that Dismas had ever committed. He knew about the sins that Dismas could remember, and He knew about the sins that Dismas had probably long forgotten. He knew the numbers of hairs on Dismas’ head. He knew Dismas from all eternity. He loved Dismas from all eternity. And Jesus responded in a way that only the King of Glory could respond, saying:

“Amen, I say to you, this day thou shalt be with Me in Paradise.”

Bellarmine reminds us that Our Lord does not say “after some years of suffering in Purgatory” or “after a few months.”
He says: “This day.”
Bellarmine writes:

“On this very day all the sins which he had committed during his life are forgiven: he is also ranked with the princes of his people, to wit, with the patriarchs and the prophets: and finally Christ raises him to the companionship of His table, of His dignity, of His glory, and of all His goods.”

Saint Augustine and Saint Cyprian regard Saint Dismas as a martyr, since he professed God even when most of the Apostles were absent. Dismas died not merely a saint, but a great saint.
When the body of Dismas was taken down from the cross, he was already with God in Paradise. He went on the cross a sinner, but came down a great saint.
No doubt, some devilish souls were already making room for Dismas in Hell. But some things happened that the denizens of Hell were not expecting: the outpouring of grace by the Holy Spirit, a few kind words by a repentant man, and the mercy of God. While Jesus was mocked on the cross, as St. John Chrysostom taught us, Hell was mocked by Jesus, and as far as Saint Dismas was concerned, Hell had no victory.
Many of us have persons in our lives who seem to have abandoned Christ. For some, maybe that person is himself. If you are such a person reading this now, let me remind you that Good Friday is an invitation. It’s an invitation to approach our Savior, Who still offers outstretched arms to us.
Whittaker Chambers observed many years ago that “each of us hangs always upon the cross of himself.” That is an observation that life is not about whether we will hang upon a cross, but what we do while we are on it. We must make the same choice on this Good Friday that Saint Dismas made on that Good Friday: Do we turn away or do we turn toward Jesus? And if you turn toward Him, do you doubt that His answer to you will be different from the answer He gave to Dismas? Do you doubt that He so desperately wants to say those same words to you?
“But I’ve committed too many sins—too many bad sins. It’s too much to ask.” you object.
Nonsense.
One of the striking aspects of the Catholic Faith is how quickly we can return to it. Ten, twenty, thirty, fifty, ninety years of sin are no match for ten minutes in Confession. And they never will be.
Today, let’s remember Saint Dismas. Remember that the mercy of God is why this is called Good Friday. Use today as the opportunity to come back.
Let’s always keep those beautiful words on our lips: “Lord, remember me when Thou shalt come into Thy kingdom.”