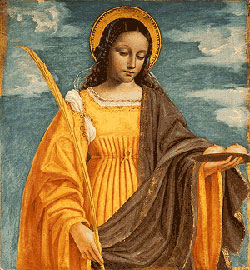 St. Agatha, also known as Agatha of Sicily, is one of the most highly venerated virgin martyrs of the Catholic Church. It is believed that she was born around 231 in either Catania or Palermo, Sicily to a rich and noble family.

From her very early years, the notably beautiful Agatha dedicated her life to God. She became a consecrated virgin, a state in life where young women choose to remain celibate and give themselves wholly to Jesus and the Church in a life of prayer and service. That did not stop men from desiring her and making unwanted advances toward her.

However, one of the men who desired Agatha, whose name was Quintianus, because he was of a high diplomatic ranking, thought he could force her to turn away from her vow and force her to marry. His persistent proposals were consistently spurned by Agatha, so Quintianus, knowing she was a Christian during the persecution of Decius, had her arrested and brought before the judge. He was the Judge.

He expected her to give in to his demands when she was faced with torture and possible death, but she simply reaffirmed her belief in God by praying: "Jesus Christ, Lord of all, you see my heart, you know my desires. Possess all that I am. I am your sheep: make me worthy to overcome the devil." With tears falling from her eyes, she prayed for courage.

To force her to change her mind, Quintianus had her imprisoned - in a brothel. Agatha never lost her confidence in God, even though she suffered a month of assaults and efforts to get her to abandon her vow to God and go against her virtue. Quintianus heard of her calm strength and ordered that she be brought before him once again. During her interrogation, she told him that to be a servant of Jesus Christ was her true freedom.

Enraged, Quintianus sent her off to prison instead of back to the brothel -- a move intended to make her even more afraid, but it was probably a great relief to her.

Agatha continued to proclaim Jesus as her Savior, Lord, Life and Hope. Quintianus ordered her to be tortured. He had her stretched on a rack to be torn with iron hooks, burned with torches, and whipped. Noticing Agatha was enduring all the torture with a sense of cheer, he commanded she be subjected to a worse form of torture ? this evil man ordered that her breasts be cut off.

He then sent her back to prison with an order of no food or medical attention. But the Lord gave her all the care she needed. He was her Sacred Physician and protector. Agatha had a vision of the apostle, St. Peter, who comforted her and healed her wounds through his prayers.

After four days, Quintianus ignored the miraculous cure of her wounds. He had her stripped naked and rolled over naked over hot coals which were mixed with sharp shards. When she was returned to prison, Agatha prayed, "Lord, my Creator, you have ever protected me from the cradle; you have taken me from the love of the world, and given me patience to suffer: receive now my soul."

Agatha is believed to have passed into Heaven around the year 251.

She is commonly featured in religious art with shears, tongs, or breasts on a plate.

St. Agatha is the patron saint of Sicily, bellfounders, breast cancer patients, Palermo, rape victims, and wet nurses. She is also considered to be a powerful intercessor when people suffer from fires. Her feast day is celebrated on February 5.