The Pope of Vatican I and the dogma of the Immaculate Conception, beatified but still waiting Sainthood 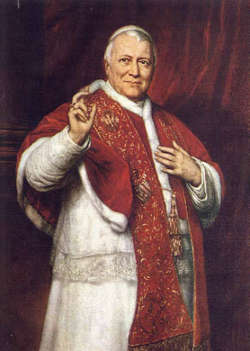 Blessed Pope Pius IX (13 May 1792, Senigallia - 7 February 1878), born Giovanni Maria Mastai-Ferretti, was the longest-reigning elected Pope in the history of the Catholic Church, serving from 16 June 1846 until his death, a period of nearly 32 years. During his pontificate, he convened the First Vatican Council in 1869, which decreed papal infallibility. The Pope defined the dogma of the Immaculate Conception of the Blessed Virgin Mary, meaning that Mary was conceived without original sin. Pius IX also granted the Marian title of Our Mother of Perpetual Help, a famous Byzantine icon from Crete entrusted to the Redemptorist priests. In addition to this, Pius IX was also the last Pope to rule as the Sovereign of the Papal States, which fell completely to Italian nationalist armies by 1870 and were incorporated into the Kingdom of Italy. He was beatified in 2000.