She is our Tuesday Saint (beatified) of the Day 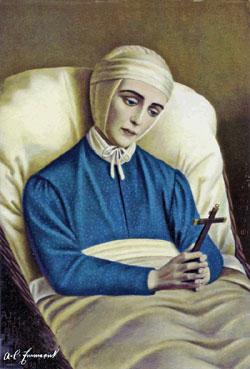 As a young lay woman in Coesfeld, Germany, Anne Catherine Emmerick, employed as a seamstress, daily attended Mass, visited the Blessed Sacrament, and in the late evening spent hour upon hour praying on her knees. Around midnight, she would leave her home to make the Stations of the Cross by candlelight at a series of wayside shrines outside her village, along a lengthy path that wound through the pine woods, taking over two hours to complete. She offered her devotions especially for the souls in purgatory, who in turn assisted her, as she explained: "Whenever I do something for them, they pray for me." In her interior life, she drew much inspiration from the liturgical ceremonies of the Church, especially those of Holy Week. At the age of twenty-eight, Anne Catherine entered an Augustinian convent. But in 1811, after nine years of religious life, she was forced to leave when her convent was suppressed by Napoleon, who controlled the region. Soon afterward, she fell ill, and spent her remaining years bedridden. In this state of suffering, she received numerous visions, private revelations, and the mystical gift of the stigmata.