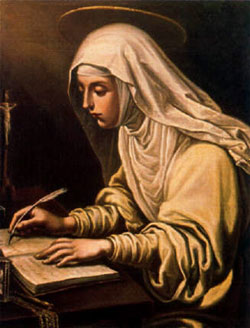 St. Catherine was born in Florence in 1522. Her baptismal name was Alexandrina, but she took the name of Catherine upon entering religion. From her earliest infancy she manifested a great love of prayer, and in her sixth year, her father placed her in the convent of Monticelli in Florence, where her aunt, Louisa de Ricci, was a nun. After a brief return home, she entered the convent of the Dominican nuns at Prat in Tuscany, in her fourteenth year. While very young, she was chosen Mistress of Novices, then subprioress, and at twenty-five years of age she became perpetual prioress. The reputation of her sanctity drew to her side many illustrious personages, among whom three later sat in the chair of Peter, namely Cerveni, Alexander de Medicis, and Aldo Brandini, and afterward Marcellus II, Clement VIII, and Leo XI respectively. She corresponded with St. Philip Neri and, while still living, she appeared to him in Rome in a miraculous manner.She is famous for the "Ecstacy of the Passion" which she experienced every Thursday from noon until Friday at 4:00 p.m. for twelve years. After a long illness she passed away in 1589. Her feast day is February 13.