How Mardi Gras was traditionally a Catholic thing; the end of Ordinary Time and the start of Lent the next day 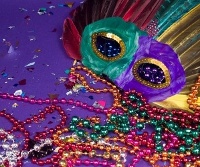 Mardi Gras is strongly associated with wild bacchanalia and debauchery, but the original intent of the holiday and how it's kept by the faithful is much different. Fat Tuesday, as it is known in English, is a long-standing tradition of the Catholic Church and it marks the last day of ordinary time before the start of Lent, a time of fasting and repentance. While the parties in Europe, South America, and parts of the United States have gained the most attention in popular culture, they seriously misrepresent and outright eclipse the Catholic intent of the holiday.
According to historians, the celebration of Mardi Gras has its roots in the pagan Roman celebration of Lupercalia. This was a February holiday and it honored the Roman god of fertility. It involved feasting, drinking, and carnal behavior.
However, with the rise of the Church in ancient Rome, Christian teaching and morals took root, but there always remained a strong need to blend ancient Roman traditional practices with the growing Christian faith. The blending of tradition with new religious beliefs was a common practice in the ancient world and it helped people to transition away from paganism. In fact, there are a number of ancient Roman traditions that persevere in the Roman Catholic Church to this day, where they continue to guide the faithful.

As Catholic Christianity spread throughout Europe during the first millennium, different cultures celebrated the last day before Lent in their own ways, adapting the practices to suit their cultures. In France, the holiday became particularly popular as people feasted on foods that would be given up during the forty days of Lent. Meats, eggs, and milk were finished off in one day, giving the holiday its French title of 'Mardi Gras' which means Fat Tuesday.

As Europeans crossed the Atlantic to colonize the Americas, they brought their religious practices with them. From the onset, holidays such as Mardi Gras were celebrated in the colonies with as much enthusiasm as they were celebrated in Europe. As the colonies swelled with European immigrants, the celebrations went from the simple to the elaborate. In New Orleans, masked balls and public celebrations quickly became common. In fact, the celebrations became so popular that virtually every citizen of the city joined in even if they were not Catholic. 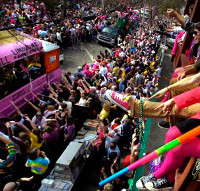 However, in the late 18th century, the Spanish took control of New Orleans and having a more militant and serious perspective on the faith, they imposed significant restrictions on the holiday revelry. Among them, they banned masked balls. However, by 1823, this ban was lifted and parades returned by 1837. At this point, the celebration began to lose its identity as an exclusively Catholic tradition and became more secularized over the centuries.
In Louisiana, Mardi Gras in an official state holiday.
In other parts of the world, the holiday became a season unto itself each branded with unique cultural practices. For example, Venice, Italy is famous for the masked balls that take place on Mardi Gras and the days before. The Venetian tradition dates back to the 13th century and the city remains a popular Mardi Gras destination today.
Still, the original intent of Mardi Gras has always been to indulge, within the context of Catholic morality and reason, the last day before the start of the Lenten season. Here, it is appropriate to mention that while Lent is a season of self-sacrifice and repentance, it is not meant to be a period of self-punishment or extreme hardship.
Posted by Deacon Mike Talbot at 8:30 AM